Communion Under Both Kinds? 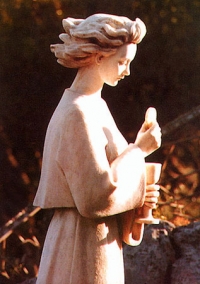 As the Church celebrates the 100th Anniversary of Our Lady’s appearances at Fatima this year, and with the canonizations of Jacinta and Francisco Marto, it may come as a shock to the vast majority of modern-day Catholics to come to the realization that the three shepherd children were ‘traditional’ Catholics.   As Our Lady was appearing to them in 1917, and as the Guardian Angel of Portugal prepared them for Her visit in 1916, the Fatima children faithfully and exclusively attended the Traditional Latin Mass.

However, it may come as a shock to some traditional Catholics to call to mind that in 1916 the Guardian Angel of Portugal administered Holy Communion to Jacinta, Francisco and Lucia under ‘both Species.’ Not to fear, dear friends, this was not an endorsement of the Protestant custom adopted after Vatican II of what some in the Church now call “Communion under both kinds.”

The Guardian Angel of Portugal appeared, for the third and last time, to the three shepherd children at the Cabeco. The Cabeco is a rocky hill with a cave near its bottom, reminiscent of Calvary with the tomb of Christ at its base.  The Cabeco is a favorite place of mine to talk to the pilgrims about the Most Blessed Sacrament since the Angel appeared here in 1916 with a Bleeding Host from which drops of the Precious Blood were seen by the children falling into a Chalice.  This appearance of the Angel with the Blessed Sacrament calls to mind the Precious Blood that Our Lord and God, Jesus Christ, shed at Calvary, which we recall at each and every Holy Sacrifice of the Mass.

The Bleeding Host and the Chalice remained suspended in the air as the Angel knelt down with the three children as they prostrated themselves before the Real Presence of Our Lord and God, Jesus Christ.   The Angel led them in repeating the following ‘Angel Prayer’ three times:

“O Most Holy Trinity, Father, Son and Holy Spirit, I adore Thee profoundly. I offer Thee the Most Precious Body, Blood, Soul and Divinity of Jesus Christ, present in all the tabernacles of the world, in reparation for the outrages, sacrileges and indifference by which He is offended.   By the infinite merits of the Sacred Heart of Jesus and the Immaculate Heart of Mary, I beg the conversion of poor sinners.”

The Angel and the three shepherd children knelt before our Eucharistic Lord, the posture used to receive Holy Communion at the Traditional Latin Mass. Kneeling before the Lord is a clear indication of our subservience to the King of Kings.  Standing for Holy Communion or, God-forbid, standing during Eucharistic adoration, is contrary to our Latin-Rite tradition and implies equality with Almighty God.  One stands before equals.  One kneels before the Divine Presence, as demonstrated at Fatima.

Adoration of the Eucharistic Lord on bended knee is also made manifest at the Traditional Latin Mass where there are at least eleven genuflections by the Priest to honor the Real Presence of the Lord after the Consecration of the Host, reduced to three in the Novus Ordo Mass. Lex orandi, lex credendi (the law of prayer is the law of belief): as at Fatima, worship on bended knee reflects and reinforces our Catholic belief in the Body, Blood, Soul and Divinity of Christ being Truly Present in the Most Blessed Sacrament.  That is why our Catholic churches used to have Altar Rails to kneel for Communion prior to Vatican II; and speaks to the devastatingly diminished belief in the Real Presence after their removal from most Catholic churches some fifty years ago.

As the Angel gave Holy Communion to the three Children, only the eldest, Lucia (age 10), received the Sacred Host as she had already made her First Holy Communion.   But the younger children, Francisco (age 8) and Jacinta (age 7), having never made their First Holy Communion, drank the Precious Blood of Christ from the Chalice.  Unlike the Protestant practice of eating bread along with drinking grape juice or wine, the Angel did not give both the Sacred Host and the Precious Blood to any of the children.  Lucia, and only Lucia, received the Host.   Francisco and Jacinta, and only them, received from the Chalice.

When the Angel disappeared, along with the Chalice, Francisco asked his older cousin, Lucia, whether he and his sister had received Holy Communion since they did not receive a Host. Lucia affirmed that they did indeed receive Holy Communion.  Lucia responded correctly since in either the Sacred Host or in the Precious Blood, Jesus is really and truly entirely Present.  This confirms the centuries-old practice of receiving only the Consecrated Host at a Traditional Latin Mass.  It confirms that our Eucharistic Lord is really and truly Present in His Body, Blood, Soul and Divinity in the Host alone.  One does not have to “drink from the cup,” as they now say, in order to receive the Precious Blood of Christ, as it is contained in the Sacred Host.

The Thirteenth Session of the Council of Trent, Chapter IV, decrees that at the consecration of the Holy Sacrifice of the Mass, “… a conversion is made of the whole substance of bread into the substance of the Body of Christ Our Lord, and the whole substance of wine into the substance of His Blood; which conversion is, by the Holy Catholic Church, suitably and properly called Transubstantiation.” Nevertheless, in the context of Trent Session Thirteen, Chapter III: Jesus Christ is really and truly Present: Body, Blood, Soul, and Divinity in either species, as affirmed by the Fatima Message.

But then, why did the Angel give the Precious Blood to Jacinta and Francisco?   The teaching in the Fatima Message was not just for Latin Rite Catholics but for Eastern Rite Catholics as well, especially those in what would become the Soviet Union, who would soon find their Holy Catholic Faith threatened by the errors of Russia – as Our Lady would foretell on July 13, 1917.  In the Eastern Rites, young children make their First Holy Communion as infants at the time of their Baptism by receiving a drop of the Precious Blood in the form of Wine.  After that, as they are growing up and are too young to receive Jesus in the form of Bread, the Priest gives them a drop of the Precious Blood with the tiny spoon used to administer Holy Communion under both species to those who are of age, as is the custom in the Byzantine Catholic Rite.

There is nothing wrong with the Eastern-Rite Catholic tradition of the Priest giving the Consecrated Bread mingled with Consecrated Wine on a small spoon directly into the mouth of the Communicant.  In his classic booklet, Communion Under Both Kinds: An Ecumenical Surrender, Michael Davies begins by saying:  “There is no theological objection to the laity receiving Holy Communion under both kinds (sub utraque specie).  The controversy on this topic was initiated by those who claimed that there is a theological objection to the reception of Holy Communion under one kind only.”  It should be noted that the misguided insistence on the necessity of the laity receiving Holy Communion under both species was a basis for the 15th century Hussite Heresy.

For our times, the Fatima Message’s possible reference to the Eastern Rites could also bring comfort to those tradition-minded Catholics who felt abandoned by the Protestantized man-centered Novus Ordo Mass. Like Eastern Rite refugees fleeing from Communist Russia, many Latin Rite Catholics fled for a safe haven to the Byzantine or other Eastern Rite Catholic Churches where their centuries-old beautiful God-centered Traditional Divine Liturgies were still being offered after Vatican II.

At Fatima, there is a landmark ‘Onion Dome,’ marking the exact location of an Eastern-Rite Chapel. This Onion Dome, a traditional Eastern-Rite church feature, can be seen rising just behind Fatima’s venerable Basilica of Our Lady of the Rosary.  This Eastern Rite Chapel is on the second floor of Domus Pacis, the International Headquarters of the Blue Army of Our Lady of Fatima (World Apostolate of Fatima), which was constructed in the years 1953-58. Domus Pacis also is home to a Latin-Rite Chapel on the first floor.  The Eastern-Rite Chapel has a traditional wall of Icons (an Iconostasis) and is dedicated to Our Lady of the Dormition.  It was intended, along with the distinctive Onion Dome, to symbolize and to pray for the conversion of Russia, as promised by Our Lady of Fatima on July 13, 1917.  Cardinal Eugene Tisserant, Head of the Congregation for the Oriental Church, blessed Domus Pacis on October 12, 1956, as a Papal Legate for Pope Pius XII.

But ultimately, we are Latin Rite Catholics and we are not at home without our Traditional Latin Mass.  We thank God and Our Lady of Fatima for the few opportunities that we have to publicly attend the Immemorial Mass of the Ages.  It may seem that we have a long way to go before the Traditional Latin Mass is fully restored and available to Catholics everywhere and on an everyday basis without restrictions.  But, Our Lady of Fatima gives us hope, as She said at Fatima on July 13, 1917:  “In the end, My Immaculate Heart will triumph.”

Communion Under Both Kinds?
Published in Remnant Articles

[Comment Guidelines - Click to view]
The Remnant values the comments and input of our visitors. It’s no secret, however, that trolls exist, and trolls can do a lot of damage to a brand. Therefore, our comments are heavily monitored 24/7 by Remnant moderators around the country.  They have been instructed to remove demeaning, hostile, needlessly combative, racist, Christophobic comments, and streams not related to the storyline. Multiple comments from one person under a story are also discouraged. Capitalized sentences or comments will be removed (Internet shouting).
The Remnant comments sections are not designed for frequent personal blogging, on-going debates or theological or other disputes between commenters. Please understand that we pay our writers to defend The Remnant’s editorial positions. We thus acknowledge no moral obligation whatsoever to allow anyone and everyone to try to undermine our editorial policy and create a general nuisance on our website.  Therefore, Remnant moderators reserve the right to edit or remove comments, and comments do not necessarily represent the views of The Remnant.
back to top
Tweet
More in this category: « PAT BUCHANAN and his Christian Vision of America FATIMA AFTER 100 YEARS: Matt & Ferrara on Location »