Fr. Jose Planelles: Another Martyred Priest of the 20th Century 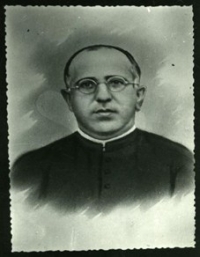 Translated for The Remnant by Dr. Boyd D. Cathey

Editor's Note: The Spanish Civil War (1936-1939) was fomented in increments by the resentments caused by the Carlist wars of the nineteeth century, the Spanish-American War, and the deepening anticlericalism of the post-enlightenment age.

The mounting tensions exploded into war at dawn on July 18, 1936, when Nationalist troops, under the leadership of General Franco—who would become one of the greatest rulers in modern Spanish history and yet today is pilloried as a "hater" and a "fascist" by the neo-fascists of the New World Order— rose up against the new, communist Republic of Spain. Almost immediately, surrounding world powers began to send aid to their favorites: Soviet Russia came to support the Republic, while Germany and Italy backed the Nationalists.

The Spanish Civil War was not merely a surface conflict between political parties with opposing interests; it was a monumental struggle between two antithetical ways of life—two faiths. It was the anarchist, utopian ideals of the Republic—ideals which constantly devalue, even sacrifice, the present generations in exchange for some forever-unattainable but glorious future—these ideals versus the “old”, Catholic way of life, which seeks to live for a different kind of future entirely, and until then lives fully, lovingly and truthfully in the present. Wherever the Republic’s army went, it left smashed churches, murdered religious, corpses raised up in the streets as warnings to dissenters.

The efforts of the Nationalists included heroic feats like the siege of the Alcazar of Toledo, and bittersweet sacrifice, such as the martyrdom of Bishop Asensio. Their moves and countermoves on the battlefield led to an impasse on the outskirts of Madrid, and finally to a triumphant entrance into the city. Victory for God and for Franco! Viva Cristo Rey!

But the war, of course, was not without heavy losses on all sides. The POWs experienced a very different war from those on the field, but acts of heroism, even martyrdom, were not uncommon among them. One such hero was a priest named Fr. Jose Planelles, who had been free to walk away, but remained to administer the sacraments to the prisoners. This selflessness ultimately cost him his life. MJM

In the part of Spain controlled by the Republican Popular Front toward the end of the first year of the bloody Civil War, to be a priest was a certain way to prison, torture, and eventual execution. Father Jose Planelles Marco, nevertheless, had a chance to avoid this fate. Two times he had an opportunity to escape and avoid execution, and two times he was faithful to his vocation and his calling to “care for souls,” remaining with the souls in his care to deliver the sacraments to the condemned. And, as a result, he was killed by a firing squad along with a number of other so-called “political prisoners.”

His history is recounted in a very detailed volume authored by historian Francisco Torres Garcia, titled El Ultimo Jose Antonio (Ediciones Barbarroja, 2013). Although Torres Garcia’s definitive study is centered on the imprisonment and last days of the founder of the Falange Espanola, Jose Antonio Primo de Rivera, the book is laced with vivid accounts of Jose Antonio’s relationship and dealings with Father Planelles, and the testimony, gathered from official reports and eye-witness accounts, including from former members of the Socialist militia, is both impressive and moving. Father Jose was born in the village of San Juan de Alicante, in the province of the same name, educated in the seminary of San Miguel de Orihuela, ordained in 1910, then serving as a simple parish priest in various assignments before becoming director of a high school in the city of Alicante. There he became well-known known as a wise, holy, and very knowledgeable priest, a reputation significant enough to get him arrested (September 12, 1936) after the beginning of the Civil War by order of the local “popular committee.”

Imprisoned with a number of so-called “political prisoners,” Father Jose suffered bad health, including back problems, and the filthy conditions of the prison only intensified his condition. Nevertheless, in a short time, at only 51 years of age he became known as “the little old priest and confessor of the imprisoned.” He took upon himself the role of comforting and consoling spiritually the numerous prisoners, hearing their confessions, and offering words of hope and good counsel.

After two months--on November 18-- a civilian tribunal re-examined his case, and seeing that no particular charges had been lodged against him, decided to release him. Despite this, managerial confusion and Father Jose’s own desire to comfort and remain with the prisoners meant that he would continue behind bars.

It was at this very time that the founder of the Falange, Jose Antonio Primo de Rivera, who had been sentenced to death, asked for a priest to hear his final confession before being executed. Father Planelles, already a resident there, was selected to hear the Falange founder’s confession. Torres Garcia recounts in detail this famous scene:

“During forty-five minutes, kneeling in humble submission, Primo de Rivera confessed his sins and asked for forgiveness. At the end, both men stood and embraced tearfully. The older priest presented to the young political leader a copy of the New Testament. Shortly before his execution, Jose Antonio would inscribe in this volume the following words: ‘God grant that my blood will be the last Spanish bloodshed and that my death can divert the great discord.’ On November 20, Jose Antonio was executed, blessing his guards as he died.”

Unable to secure his freedom despite the decision of the tribunal, Father Jose remained in prison, where he continued to comfort spiritually the many prisoners. On November 29, it seemed that he might truly gain his liberty, but once again, the civilian Socialist militia intervened and removed fifty-one prisoners to be executed, in reprisal, it was claimed, for bombing of the city by units of the newly-formed Nationalist air force. According to Torres Garcia, Father Planelles might have managed to avoid the fate of the others. Still--and again based on numerous testimonies- -he chose to accompany the prisoners, requesting that he be permitted to give them final absolution before execution by firing squad.

His process of Beatification by the Church has been introduced and is advancing. ■

This article appeared in last week's print/e-edition of The Remnant. To see what else you missed, SUBSCRIBE RIGHT NOW

[Comment Guidelines - Click to view]
The Remnant values the comments and input of our visitors. It’s no secret, however, that trolls exist, and trolls can do a lot of damage to a brand. Therefore, our comments are heavily monitored 24/7 by Remnant moderators around the country.  They have been instructed to remove demeaning, hostile, needlessly combative, racist, Christophobic comments, and streams not related to the storyline. Multiple comments from one person under a story are also discouraged. Capitalized sentences or comments will be removed (Internet shouting).
The Remnant comments sections are not designed for frequent personal blogging, on-going debates or theological or other disputes between commenters. Please understand that we pay our writers to defend The Remnant’s editorial positions. We thus acknowledge no moral obligation whatsoever to allow anyone and everyone to try to undermine our editorial policy and create a general nuisance on our website.  Therefore, Remnant moderators reserve the right to edit or remove comments, and comments do not necessarily represent the views of The Remnant.
back to top
Last modified on Friday, May 12, 2017
Tweet
More in this category: « CATHOLIC FRANCE RISING: Tens of Thouands to Walk French Pilgrimage Dedicated to Our Lady of Fatima PLAN B: The Fall of the Novus Ordo Seclorum »