Written by  Christopher A. Ferrara
Rate this item
(70 votes) 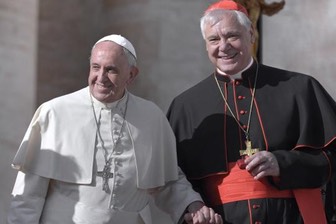 The Pope and the Cardinal go together, hand in hand

As Prefect of the Congregation for the Doctrine of the Faith, Cardinal Gerhard Müller is charged with the duty to “spread sound doctrine and defend those points of Christian tradition which seem in danger because of new and unacceptable doctrines.” When confronted with the “new and unacceptable doctrines” enunciated in the disastrous Chapter 8 of Amoris Laetitia, however, Müller engages in a shameless cover-up, leaving it to concerned members of the laity to defend the Church’s infallible moral teaching from AL’s blatant attack upon it.

In an interview published by Aleteia on April 21, Müller declares that “The pope has not, will not, and cannot change Revelation. Some claim that the pope has changed the foundations of Church morality and has relativized the sacrament of holy matrimony. This he would not and cannot do.”


A deliberate misstatement of the issue designed to conceal the real issue. The real issue is not whether the Pope seeks to “change Revelation,” as if that were possible, but rather whether AL Chapter 8 undermines the revealed truth concerning the indissolubility of marriage and the universally binding, exceptionless character of the negative precepts of the natural law, including the Sixth Commandment.

A day after the Müller interview appeared, Sandro Magister published on his indispensable blog a link to the Italian text (translation mine) of an extraordinary address by Dr. Claudio Pierantoni, Professor of Medieval Philosophy at the University of Chile, one of six delivered in Rome at a conference of lay academics on April 22, convened to confront the menace that is AL.

After discussing the cases of Pope Honorius and Pope Liberius, Pierantoni says of the “case of Francis” that it represents, with the promulgation of AL, a crisis that is “now to be considered the most serious of those ever faced by the Church.”  Pope Bergoglio’s opening to Holy Communion for public adulterers in “certain cases,” he writes, is “a deadly Trojan Horse capable of triggering, from within the edifice of the Church itself, a strategic dynamiting of all her defenses and her very foundations.”

The principal evil of AL Ch. 8, as any perceptive reader can see, is its reduction of the negative precept of the natural law forbidding adultery to a mere “rule” on the order of a human positive law that admits of exceptions, when in truth, as Pierantoni notes, the natural law is inscribed in human nature and can never be violated without doing violence to the human person. By analogy, he argues, the automobile manufacturer’s directive that one must not put diesel fuel into a gasoline engine is not a “rule” but a requirement for the proper functioning of the engine to which there can be no exceptions, according to the very nature of the thing.

Pope Bergoglio’s crudely demagogic conflation of the natural law with human “rules” is confirmed, says Pierantoni, by his “repeated attack, present in AL 8, against the legalists, the presumed hard-hearted and hypocritical ‘Pharisees.’ This attack, in fact, betrays a complete misunderstanding of the position of Jesus toward the Law, since His criticism of Pharisaical behavior is founded precisely on the distinction between positive law (‘the precepts of men’)… and the fundamental Commandments, which are instead the prime requisite, irrenunciable, which He himself requires of aspiring disciples.”

Even more devastating is the intervention at the same April 22 conference by Dr. Anna M. Silvas, a renowned researcher and historian of late Christian antiquity, who discovered the location of Saint Basil the Great’s retreat on an expedition to Turkey. She makes short work of the claim by “intentionally orthodox… higher prelates and theologians [Müller obviously among them] who treat the turmoil arising from ‘Amoris Laetitia’ as a matter of ‘misinterpretations’.”

On the contrary, she writes, Pope Francis’ ‘intent’ in this text is perfectly recoverable from the text itself, reading normally and naturally and without filters.” There is no need to repeat here the detailed analyses which place that conclusion beyond dispute, as we see here, for example.

Then too, Silvas notes, there is the overwhelming contextual evidence of Bergoglio’s seditious intent. Her summary (which I have reformatted for readability) is most useful:

… Archbishop Bergoglio’s known practice in his archdiocese of tacitly admitting to Holy Communion all comers, the cohabiting, as well as the divorced and civilly remarried;

…his personal choice of Cardinal Kasper to deliver the opening address of the 2014 Synod, as if we are to politely turn a blind eye to the entire back-history of Kasper’s activities on these issues;

...the various ways in which these two synods were massaged, such as the papal order that a proposition on communion for the divorced and remarried, voted down by the bishops in the 2014 synod, be included in the final relatio;

…his scathing condemnations of the Pharisees and other rigid persons in his concluding address at the conclusion of the 2015 Synod;

...more recently, his warm praise of Bernard Häring, the doyen of dissenting moral theologians throughout the 1970s and 80s, whose 1989 book on admitting the divorced and civilly remarried to the Eucharist in imitation of the Eastern Orthodox oikonomia, was ammunition in Kasper’s saddle bag;

…[his] endorsement of the Argentinian bishops “interpretation” of AL, precisely in the way that he intended: “No hay otras interpretaciones” ;

Silva then unleashes a series of admirably frank comments on the cunning Bergoglian method for changing the teaching of the Church by promoting a change in her practice, allowing apologists like Müller to claim nothing has really changed:

- Pope Francis, I am sure, is very well aware of the doctrine of papal infallibility, knows how high are its provisos—and is astute enough never to trigger its mechanism…

- For to Francis, and we have to grasp this: infallibility doesn’t matter, it doesn’t matter at all, if he can continue to be the sort of change-agent in the Church he wants to be….

- But I think ‘the spirit’ to which Francis so soothingly alludes, has more to do with Hegel’s Geist, than with the Holy Spirit of whom our blessed Lord speaks, the Spirit of Truth whom the world cannot receive, because it neither sees him nor knows him (Jn14:17

- The Hegelian Geist on the other hand, manifests itself in the midst of contradictions and oppositions, surmounting them in a new synthesis, without eliminating the polarities or reducing one to the other. This is the gnostic spirit of the cult of modernity

- So Francis will pursue his agenda without papal infallibility, and without fussing about magisterial pronouncements….

- We are in a world of dynamic fluidity here, of starting open-ended processes, of sowing seeds of desired change that will triumph over time….

- Such underhand tactics are clearly playing to the tune of Hegelian dialectic. That this is Pope Francis’s modus operandi, consider a certain ‘behind the scenes incident’ in the 2015 Synod, ‘“If we speak explicitly about communion for the divorced and remarried,” said Archbishop Forte, reporting a joke of Pope Francis, “you do not know what a terrible mess we will make. So we won’t speak plainly, (but) do it in a way that the premises are there, then I will draw out the conclusions.” “Typical of a Jesuit,” Abp Forte joked.

- In this game of subterfuge and incremental intent, the elaborate talk of painstaking “discernment” and “accompaniment” of difficult moral situations has a definite function—as a temporary blind for the ultimate goal.

- Have we not seen how the dark arts of the “hard case” work in secular politicking, used to pivot the next tranche of social reengineering? So now in the politics of the Church

- The final result will be precisely in accord with Archbishop Bergoglio’s tacit practice for years in Buenos Aires. Make no mistake, the end game is a more or less indifferent permission for any who present for Holy Communion.

And what does Cardinal Müller have to say in the face of the undeniable reality that the man from Argentina has spent the past four years engaging in ecclesial subversion, culminating with the publication of AL? He declares:

The true intention of the apostolic exhortation, Amoris Laetitia, was to place at the center the full, complete biblical message concerning marriage as a sacrament and a way of life. In addition, it aimed to take into consideration those who, on account of various circumstances, have failed or have run into trouble, so that we would not say: “Here are those who do everything right, whereas the others do not belong to us.”

That is simply calculated dissembling. Worse, by aping the Bergoglian caricature of defenders of orthodoxy as hard-hearted Pharisees who say “Here are those who do everything right, whereas the others do not belong to us,” he moves beyond a simple cover-up to outright aiding and abetting of the Bergoglian conspiracy—there is no other word for it—to undermine the Church’s entire moral edifice by institutionalizing ecclesial accommodation of public adultery.

At least the four cardinals have had the courage publicly to question Bergoglio’s intent in the form of their five dubia which reduce to one question: Whether Bergoglio intends to undermine the very concept of the moral law—and with this, the very credibility of the Church’s teaching office.

As things now stand, Cardinal Müller is no defender of orthodoxy. He has decided, rather, to be a defender of Pope Bergoglio. That is, he is a defender of the most wayward Pope in Church history—a Pope who, to quote Pierantoni, is “the victim of a generalized and epochal alienation from Tradition in broad strata of theological teaching.”

Under its current leadership, what the Congregation for the Doctrine of the Faith offers the Church is vastly worse than nothing.

[Comment Guidelines - Click to view]
The Remnant values the comments and input of our visitors. It’s no secret, however, that trolls exist, and trolls can do a lot of damage to a brand. Therefore, our comments are heavily monitored 24/7 by Remnant moderators around the country.  They have been instructed to remove demeaning, hostile, needlessly combative, racist, Christophobic comments, and streams not related to the storyline. Multiple comments from one person under a story are also discouraged. Capitalized sentences or comments will be removed (Internet shouting).
The Remnant comments sections are not designed for frequent personal blogging, on-going debates or theological or other disputes between commenters. Please understand that we pay our writers to defend The Remnant’s editorial positions. We thus acknowledge no moral obligation whatsoever to allow anyone and everyone to try to undermine our editorial policy and create a general nuisance on our website.  Therefore, Remnant moderators reserve the right to edit or remove comments, and comments do not necessarily represent the views of The Remnant.
back to top
Last modified on Tuesday, April 25, 2017
Tweet

More in this category: « THE SOROS FACTOR: Did O'Reilly Pick on the Wrong Guy? WHAT IS DEATH? (John Vennari Remembered) »