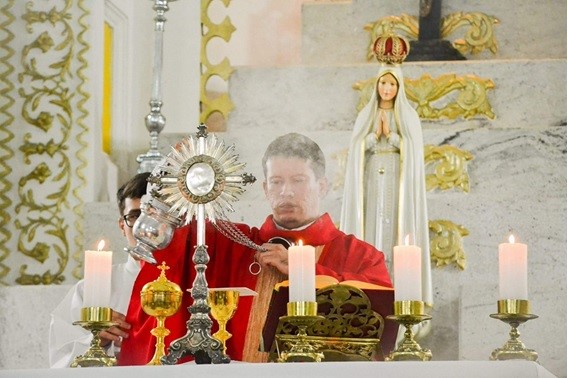 Editor’s Note: We have received the following report from our Catholic brothers in the Archdiocese of Niterói (a municipality close to the City of Rio de Janeiro), Brazil, about a very serious incident that occurred last Ash Wednesday at São Domingos de Gusmão (Saint Dominic de Guzmán) parish church. We kindly ask you to read it and then meet our requests for Catholic action at the article’s conclusion. MJM

Last Ash Wednesday everything was ready for the celebration of the Holy Mass at São Domingos de Gusmão parish church. The faithful entered the church and prepared themselves to ask God’s Grace, receive the Sign of the Cross on their foreheads, listen to the exhortation to “turn away from sin and be faithful to the Gospel”, and so enter into the Lenten Season. The service was a Traditional Latin Mass; the minister was a diocesan priest, Father Anderson Batista da Silva, who has celebrated the Vetus Ordo for a long time, even before the promulgation of Summorum Pontificum.

The Mass had already begun when a man in his sixties entered the church and, from the outset, started to complain, out loud, about several issues (the rite, its duration, the Gregorian chant, etc.), thus, bothering those around him. At the time of Communion, as usual, the faithful formed a line towards the altar rail and, on their knees, started to receive the Body of Christ on the tongue, as required by the ancient practice of the Church-¾every faithful assisting the service was aware of this manner of receiving the Host, especially since because Father Batista explains the details of the traditional rite before it starts.

The angry man lined up for Communion and continued grumbling and moaning all the way to the Communion rail. At his turn, he refused to receive Communion on the tongue, demanding instead that Father Batista place the Host in his hand. Father Batista calmly explained to him that the prescribed manner of receiving the Sacrament according to the traditional rite is on one’s knees and on the tongue, and the matter was not for the faithful to decide upon.

However, the man did not accept the priest’s explanation and demanded out loud to be given the Communion in the hand. Probably, intending to avoid further disturbance at the service, the priest conceded and gave the Host in his hand. Then, he asked the man to consume the Host right away. However, with the Sacrament in his hand, the man closed it and refused to consume the Host in front of the priest, saying that the Host did not belong to the priest and that he had the right to make his Communion wherever he wanted.

He further shouted saying that this was not his religion and that this old Mass did not exist. At that moment, those who were near him – acolytes and other faithful alike – warned him that he could not leave the place with a consecrated Host.

Ignoring the warning, the man threatened those who surrounded him by saying that he would break through them. In a burst of anger, he shouted: “One, two, three”, and moved violently towards those who were surrounding him, as to push them down and leave the Church with the Blessed Sacrament.

At this point, the faithful tried to stop him and the man fell down on the floor. The acolytes and other faithful managed to immobilize him (without hurting him) and take him to a side room leading to the sacristy, where they were able to recover fragments of the Body of Christ that he had crushed in his hand.

Next, they moved away from the man without hurting him. The same could not be said of said man, who acted with extreme violence and started to kick the people around while staying on the floor. The faithful who had witnessed such a shameful spectacle remained at a distance, praying Hail Mary’s all the time. Father Batista looked terrified throughout the incident. He continued holding the Communion cup tight (he could not hold the Communion cup safely and interfere in the situation at the same time).

After that ghastly act of profanation and outrage, which disturbed the peace of all attendees (the ground where the fragments of the Host had been scattered had to be purified afterwards) and upon leaving the church, the man came back through the church’s main entrance and made threats. He said that he was an appellate prosecutor (a State agent) and would use his power to destroy the priest’s reputation. He said he was going to the police station to bring charges against Father Batista.

On the other hand, we, the faithful, thought that the matter would be forgotten in a few days and no more problems would arise. We were mistaken! We have just learned that criminal charges had been brought against Father Batista.

The content of the indictment, as far as we know and without having read the piece, would be an accusation made by that man (the actual aggressor and Eucharistic defiler) in the sense that he would have been grabbed and assaulted by the acolytes upon Father’s orders. Father would be guilty of inciting violence.

Criminal charges, threat of filing a legal proceeding and a promise to destroy his reputation: these are the rewards for not having prevented his acolytes and faithful from defending Jesus in the Eucharist. It is hard to conceive of such tortuous reasoning: the priest, probably considered as “retrograde” as the Tridentine rite, is now the defendant in the crime of assault and causing bodily injury.

This is the end of the report on the events that took place at São Domingos de Gusmão parish church last Ash Wednesday. We now present the requests we have mentioned at the beginning of this article.

Please offer prayers on Father Anderson Batista da Silva’s intentions. At this point, your prayers will be of great comfort and help. We cannot disregard the possibility of Divine intervention in this episode. Please, share your prayer intentions with The Remnant in the Letters to Editor or in the Comments section of RemnantNewspaper.com

Please write to the Archdiocese of Niterói (here or here, even in English) congratulating them for having such a pious priest among its ranks. Ask the diocese to protect and support Father Batista in view of any legal proceeding that might be filed against him. Pray for the Archdiocese of Niterói not to succumb to the threats of the aggressor and his social status (as he said, he is a State agent), but guide itself only for the zeal for the Eucharist

Please pray for this man who appeared at the parish church unexpectedly and caused so much harm, so that God may have mercy on him, and also that he may repent of the insults he has thrown at Christ in the Blessed Sacrament, the irreverence towards the Traditional Catholic Mass, the outrage of trying to leave the Mass with the Eucharist in his hand, and the serious threats he is making against our good Catholic priest.

[Comment Guidelines - Click to view]
The Remnant values the comments and input of our visitors. It’s no secret, however, that trolls exist, and trolls can do a lot of damage to a brand. Therefore, our comments are heavily monitored 24/7 by Remnant moderators around the country.  They have been instructed to remove demeaning, hostile, needlessly combative, racist, Christophobic comments, and streams not related to the storyline. Multiple comments from one person under a story are also discouraged. Capitalized sentences or comments will be removed (Internet shouting).
The Remnant comments sections are not designed for frequent personal blogging, on-going debates or theological or other disputes between commenters. Please understand that we pay our writers to defend The Remnant’s editorial positions. We thus acknowledge no moral obligation whatsoever to allow anyone and everyone to try to undermine our editorial policy and create a general nuisance on our website.  Therefore, Remnant moderators reserve the right to edit or remove comments, and comments do not necessarily represent the views of The Remnant.
back to top
Last modified on Friday, April 21, 2017
Tweet
More in this category: « Magdalene: She Watched God Die (And Never Lost Hope) THE SOROS FACTOR: Did O'Reilly Pick on the Wrong Guy? »