Islam: Was it Really Gabriel?

St. Gabriel: Messenger to Mohammed?
I was chatting with a guy in a waiting room the other day about religion.  He related that his cousin converted to the Russian Orthodox religion and eventually became a bishop.  He said that his cousin believed that Islam was an evil religion and remarked about how unchristian it was to allege such a thing.  I replied that most Christians today refuse to acknowledge the truth about their own religions, let alone Islam.

Is Islam just a bad or corrupted religion, or is it really evil?  This is why I believe it to be evil:


The fundamentals of the Islam faith are the messages dictated to Mohammed during his trances in a cave.  He related these verses to his followers, some of whom committed them to memory.  Many years later, they were recorded in writing and assembled into what became the Koran.  Mohammed said the messages were dictated to him by the Angel Gabriel in Arabic as directed by Allah.  Mohammedans believe this.  The Koran, complemented by the ahadith and sunan (plurals of hadith and Sunnah) which are the sayings, teachings, and actions of the prophet, is the basis of the Mohammedan religion.

The messages and instructions are arranged into chapters, called suras.  They include a chronologically and factually inaccurate version of the Old and New Testaments as well as the laws and rules of Islam, which cover just about all aspects of life and relationships.  They depict the nature and characteristics of Allah which are considerably different from the true, Almighty God the Father, of Christians and Jews.  The laws and guidance contained in the Koran are not just a corruption of those in the Bible, but in many cases, contradict the teaching of the Bible.

This raises the question regarding the real source of the suras.  Clearly, the author of the Koran wasn’t God Almighty or any of his angels; certainly not Gabriel of the Annunciation.  In spite of the many contradictions and discrepancies among the suras, they are too coherent to attribute to hallucinations.  It’s not likely that Mohammed could have made this stuff up as he went along.  In order to develop into a full-blown major world-wide religion, Islam would need super-natural support.  Therefore, Mohammed’s trances must have been induced by a malevolent spirit who identified himself to Mohammed as Gabriel.

Before Mohammed left Mecca for Medina to build up his forces, his spirit guide told him to get along with the Pagans for the good of the Moslems.  He was first told to get along with the Pagans so that the Moslems were permitted to worship Allah.  Then he was directed to encourage both groups to honor one another’s gods.  In context with the rest of the Koran, Imams don’t believe Allah would have actually condoned this.  Accordingly, they believe these particular suras weren’t really dictated by Gabriel.  They refer to them as “Satanic Verses.”  The question of whether Mohammed could have been snookered by a devious spirit is now considered off-limits. The obvious implication is that if some of the suras can be dismissed as being invalid, others might be similarly challenged. That’s why Mohammedans don’t permit further discussion of this topic.  Salman Rushdie had the audacity to write the novel, The Satanic Verses.  Accordingly, Ayatollah Khomeini issued the fatwa for his murder.

When Mohammed was able to muster sufficient fighting strength, “Gabriel” changed his tune and encouraged him to attack and subdue the pagans in Mecca.  The earlier suras about getting along with non-Moslems when Mohammed was outnumbered are often quoted to substantiate Islam as some sort of religion of peace.  When Moslems have sufficient combat power, they conduct jihad by force in compliance with the “sword to the neck” suras.  When they are outnumbered, they conduct jihad by infiltration, deceit, and terror. 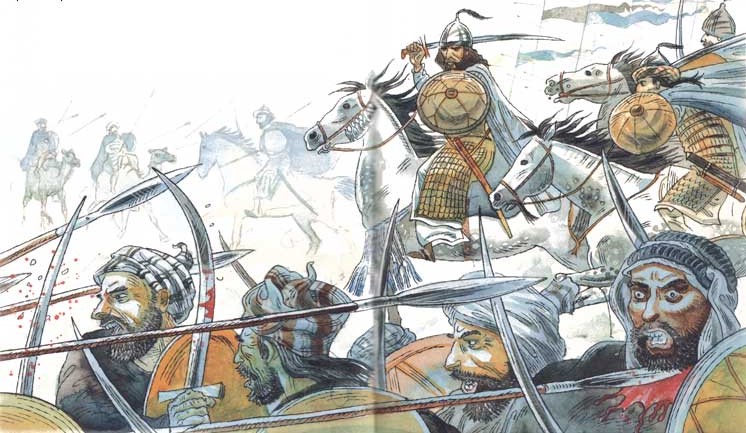 The devil is cunning and capable of causing men to believe that which is not true.  Islam is a terrible religion which promises carnal rewards in paradise for committing atrocities which would result in condemnation to Hell for a Christian or Jew.  The scary part of this is that Moslems are not breaking with the traditional beliefs of their religion when they commit atrocities; they actually believe they are pleasing Allah.  They are in critical need of our prayers.  I believe the whole Koran was inspired by a fallen angel who continues to function as a guardian for this false religion.  I don’t know how many angels, good or bad, are named Gabriel. I do know that Mohammed’s Gabriel sure as hell wasn’t the Angel Gabriel of the Annunciation.

Consider how a Moslem, lax in his faith (a so-called “moderate”), may contemplate the hereafter.  He knows what Allah said about what happens to those who make excuses not to pick up their swords to fight for Islam.  He knows what Allah promises him if he dies killing infidels.  Considering his eternal fate, he decides to join ISIS or die committing mass murder. Some refer to this as “radicalization.” Since the Moslem faith is not compatible with American laws and values, how can we “vet” Moslem immigrants be to ensure they won’t act according to their convictions?

Surely there are many Moslems living in this country who enjoy the good life and don’t make trouble.  Some create incidents for the purpose of portraying Moslems as victims of discrimination to incrementally inspire laws and rules which protect, support, and even promote the concepts of sharia.  Many, I’m sure, are happy to be outnumbered so they are not called upon to fight.   Like many so-called Christians and Jews, there must be many Muslims who don’t take their religion that seriously.  The latest initiative of naïve politicians to encourage imams to preach against jihad and inspire Moslem citizens to report Islamic terrorists to the infidel authorities reflects a complete lack of understanding of Mohammedan belief in Allah.

If I’m wrong, and it was the real Gabriel who instructed Mohammed, Christians and Jews are in deep kimchi.  We worship a God who we think loves us, when in fact he hates us.  He condemns us to hell and takes pleasure in the atrocities committed against us.

But since I’m right, it is important to pray for the enlightenment and conversion of Moslems.  It’s dangerous to perpetuate politically correct lies about what these people actually believe because it leads to policies which endanger most Americans and other infidels.

President Bush, the younger, proclaimed that Islam is a religion of peace.  Did he base this determination on an in-depth study of the Koran, the life of Mohammed, or just wishful thinking?  I think it was probably just ignorance.  In a sense, Bush was right.  Mohammedans do strive for “world peace”.  But that peace is achieved when the infidels are killed, converted, or subdued and sharia is imposed.

Pope Francis recently proclaimed that Moslem terrorism is non-existent and that there are no Islamic terrorists.  The Pope, disregarding the First Commandment, promotes ecumenism, a false doctrine that regards all religions as good.  One can infer the logic:  If all religions are good, Moslems who act badly are not really Moslems.  The problem with this logic is that good is relative.  That which pleases Allah offends God Almighty.  Given the many atrocities committed by Mohammed, I wonder if the Pope would regard him as a true Moslem.

The real problem is that the imams who preach the Koran and allege that Mohammed represents the standard of behavior to be emulated think they know more about Islam than the Pope and a former U.S. president!  How do we convince them that George Bush and Pope Francis are right and that Mohammed was wrong?

Pray for the conversion of Mohammedans.  And get ready to defend your children against Jihad right here in America. If nothing changes, it's a question of when... not if.

[Comment Guidelines - Click to view]
The Remnant values the comments and input of our visitors. It’s no secret, however, that trolls exist, and trolls can do a lot of damage to a brand. Therefore, our comments are heavily monitored 24/7 by Remnant moderators around the country.  They have been instructed to remove demeaning, hostile, needlessly combative, racist, Christophobic comments, and streams not related to the storyline. Multiple comments from one person under a story are also discouraged. Capitalized sentences or comments will be removed (Internet shouting).
The Remnant comments sections are not designed for frequent personal blogging, on-going debates or theological or other disputes between commenters. Please understand that we pay our writers to defend The Remnant’s editorial positions. We thus acknowledge no moral obligation whatsoever to allow anyone and everyone to try to undermine our editorial policy and create a general nuisance on our website.  Therefore, Remnant moderators reserve the right to edit or remove comments, and comments do not necessarily represent the views of The Remnant.
Last modified on Monday, April 10, 2017