Eh Francis! (An Important Consideration on the Question of SSPX Regularization) Featured 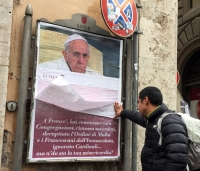 Remnant Editor’s Note: Father Patrick de la Rocque, SSPX, is the Parish Priest of the Society of St. Pius X’s largest church in Paris, the famous Saint Nicolas du Chardonnet. He was also one of the four theologians on the SSPX side during the doctrinal discussions under Pope Benedict. As part of our ongoing discussion of both the pros and the cons of a possible SSPX regularization, Father de la Rocque raises an interesting argument in favor of exercising extreme caution. This article appeared in the March 2017 edition of Le Chardonnet, the parish bulletin of Saint Nicolas du Chardonnet, Paris, and was posted on the SPPX French District website La Porte Latine. We’re grateful to our friend and important European ally for this exclusive Remnant translation, and would once again ask for prayers on his behalf. MJM

On the 4th February last, the area around the Vatican woke up to find itself covered with posters calling out to the Pope: “Eh, Francis! You have commissioned Congregations, dismissed priests, decapitated the Order of Malta and the Franciscans of the Immaculate, you have ignored Cardinals… But where is your mercy?”

A wind of revolt is therefore rising against Pope Francis; the reason being that his almost dictatorial ultra-progressivism has had more than one victim. Of the once flourishing young order of the Franciscans of the Immaculate nothing remains, by the personal will of the Pope. At stake: the questioning of Vatican II by these same Franciscans. What happened when a Philippine bishop received some of them into his diocese? He was immediately dismissed by Pope Francis.

Another example is Cardinal Burke. Having been dismissed from the Apostolic Signature and relegated to the position of Chaplain to the Order of Malta, he has once again been de facto dismissed from the latter post, the reason being his opposition as a Cardinal to Amoris Laetitia, which opens access to Eucharistic Communion for the divorced and remarried. As for the Order of Malta, it also having been judged too conservative, the Pope has named the very progressive Msgr Becciu to ensure its “spiritual renewal”.

While he annihilates all opposition in his disciplinary decisions, Pope Francis continues his doctrinal revolution. After communion for the divorced and remarried, the subversive Jesuit magazine Civilta Cattolica is now advancing the ordination of women, with the applause of the Pope.

This same Pope, it is said, apparently has good intentions towards Tradition (i.e. the SSPX and those communities friendly to it). His love for the peripheries allegedly disposes him to grant a personal prelature. Some, in search of recognition, rejoice at this Godsend, while others are concerned for the very reason that this Pope can be little trusted. But, what if this is the wrong question to be asking?

As Aristotle reminds us, if men come together, they do so in order to unite their efforts so as to reach a common end or goal. From a supernatural point of view, the first question is therefore to establish whether or not we pursue the same goal as today's Rome, whether we have the same Faith in Our Lord Jesus Christ sole Redeemer, and whether we have the same Faith in the Catholic Church, outside of which there can be no salvation. Alas, it is to be feared that this is not the case.

As a result, without venturing into satire, it would be indispensable to question Pope Francis on the content of his Faith, before even considering if a canonical recognition were opportune or prudent. Because the Divine Will cannot require us to place our eternal salvation in the hands of someone who does not profess the Catholic Faith. To establish legal unity without real unity would, incidentally, be contradictory. This is undoubtedly what Archbishop Lefebvre had in mind when he said in Fideliter magazine after the 1988 episcopal consecrations: “If I live a little longer and, supposing that in some time from now Rome calls me, [..] I would raise the question to the doctrinal level: 'Are you in agreement with the great encyclicals of all the Popes who have preceded you? Are you in agreement with Quanta Cura of Pius IX, Immortale Dei and Libertas of Leo XIII, Pascendi of Pius X, Quas Primas of Pius XI, Humani Generis of Pius XII? Are you in full communion with these Popes and with their affirmations?' [...] The positions would thus be clearer”.

[Comment Guidelines - Click to view]
The Remnant values the comments and input of our visitors. It’s no secret, however, that trolls exist, and trolls can do a lot of damage to a brand. Therefore, our comments are heavily monitored 24/7 by Remnant moderators around the country.  They have been instructed to remove demeaning, hostile, needlessly combative, racist, Christophobic comments, and streams not related to the storyline. Multiple comments from one person under a story are also discouraged. Capitalized sentences or comments will be removed (Internet shouting).
The Remnant comments sections are not designed for frequent personal blogging, on-going debates or theological or other disputes between commenters. Please understand that we pay our writers to defend The Remnant’s editorial positions. We thus acknowledge no moral obligation whatsoever to allow anyone and everyone to try to undermine our editorial policy and create a general nuisance on our website.  Therefore, Remnant moderators reserve the right to edit or remove comments, and comments do not necessarily represent the views of The Remnant.
back to top
Last modified on Wednesday, March 29, 2017
Tweet
More in this category: « Whatever Happened to the Clerical Sex Scandal? (‘Pulling the Plug’ 15 Years Later) LEFEBVRE and the Church of Our Time (Recalling Why He Resisted) »