The Vatican-UN Alliance: Architects of Death and Doom Featured 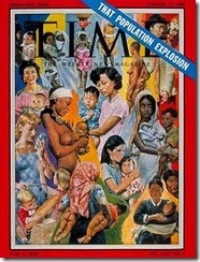 Time Magazine Cover, January 1960
I told you so.

The jaw dropping invitation by Pope Francis’ Pontifical Academy of Social Science and Sciences, to Paul Ehrlich, the author of the bestseller, The Population Bomb should finally wake up Catholics. As shocking as the announcement is, it’s not surprising to Vatican observers. From the moment Bergoglio stepped out onto the loggia, this B ishop of Rome has opened wide the bronze doors of St. Peter’s to the globalists and their population control agenda.

Not surprisingly, Peter Raven, Ehrlich’s collaborator on the Population Bomb, serves as an official member of the Pontifical Academy of Science. Paul Ehrlich hails as the ideological progenitor of the population control movement. His protégé, Jeffrey Sachs is featured as the uber Vatican expert on all things environmental and sustainable. Sachs, the UN bureaucrat and George Soros inner circle advisor, was provided a permanent perch at the Vatican while he spoke at 19 Vatican conferences during the first three years of the Francis Papacy.

This bizarre and troubling alliance was predicted when as a member of the Heartland Institute delegation, I traveled to Rome to protest the Vatican’s adoption of the UN Sustainable Development Goals and the Pope’s environmental exhortation, Laudato Si. At the Rome press conference on April 27, 2015, I addressed the topic of the Vatican’s Ehrlichian drift and adoption of population control.

The human trafficking crisis was being exploited by the Vatican as somehow linked to climate change. As an expert in human trafficking, I instantly recognized the false narrative by globalists to bootstrap their phony crisis of climate change with the real scourge of human trafficking. The culprit for the fraudulent and contrived panic peddling was none other than Jeffrey Sachs, who mimicked the scare tactics of the 60s population control guru, Paul Ehrlich. Here is an excerpt of my Rome remarks about Sachs and Ehrlich in April 27, 2015:

“And who is the Vatican consulting with on this problem? Jeffrey Sachs, who spends his career sounding the alarm that the world is overpopulated, and fertility rates must be lowered. In fact, at a 2007 international lecture, Sachs claims that “we are bursting at the seams.” The focus of Sachs’ overpopulation mantra is the continent of Africa. He argues that if only poor African countries would just lower their fertility rate, the world and Africa would thrive economically.

This fear mongering is nothing new. Sachs is standing on the shoulders of Paul Ehrlich, architect of the “sky is falling” deception perpetrated in his 1968 book, The Population Bomb. Ehrlich mastered the alarmist overpopulation canard with his infamous thesis, “the battle to feed all of humanity is over. In the 1970s hundreds of millions of people will starve to death in spite of any crash programs embarked upon now. At this late date, nothing can prevent a substantial increase in the world death rate.”

In furtherance of his imagined crisis, Ehrlich supported all kinds of draconian solutions to address this concocted calamity, including putting birth control in the water supply, forced abortions, coercive sterilizations, forcibly punishing countries who balk at implementing radical population control measures. Ehrlich’s recommendations also included punitive taxes on families who have children, and on childcare products, in order to “fix” the problem of global famine from overpopulation.

Ehrlich’s doomsday prophecy was a fraud.

Nevertheless, as a consequence of Ehrlich’s deceit, the UN began its course of worldwide reproductive edicts to reduce fertility, including contraception, sterilization and abortion. The big lie worked and the UN used fear as an opportunity to introduce abortion into the world order. Panic and fear mongering are the weapons of repressive organizations.

Jeffrey Sachs continues the phony Paul Ehrlich drumbeat of overpopulation, and conveniently adds new fear tactics of climate change and human trafficking to justify and bolster the urgency of abortion and other sterilization tools to achieve the UN’s Sustainable Development Goals.

“Yet, forever embedded into the bureaucratic culture of the UN is their desired weapon of choice, abortion on demand. That is why it is so very troubling that at a Papal Conference entitled Dignify Humanity, the Vatican is consulting with the Secretary General of the UN and Jeffrey Sachs to recommend ‘sustainable development’ measures, which we all know are abortion, contraception and sterilization to solve alleged climate change.”

Welcome to the New World Order of the Vatican where the purveyors of panic and architects of death are celebrated and featured by the Vicar of Christ. For those who still naively claim that Francis is unaware of the activities and invitations to Sachs and Ehrlich, please note that Pope Francis shared an intimate speaker dais with Jeffrey Sachs, while personally thanking Sachs for his Vatican work, and the Pope personally hosting a private meeting with Sachs and UN Secretary General Ban Ki Moon in his papal apartment. Hardly unaware.

More in this category: « Just Call Me Fritz (A Word from a Divorced Catholic) An Urgent Appeal to Prayer: Bishop Athanasius Schneider, Archbishops Lenga and Peta »