The Fruits of Radical Catholic Modernism? 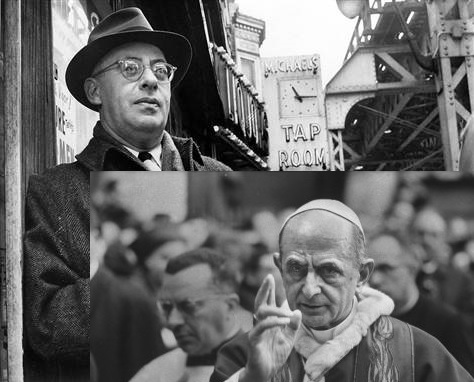 You have to wonder what impact Saul David Alinsky had on Pope Paul VI, on the Second Vatican Council, and on contemporary modernist Catholicism – especially in the United States of America.

“In 1944, the University of Chicago Press signed Alinsky to write a book promoting his vision of a new American radicalism. Six months before its publication, Agnes Meyer, who co-owned the Washington Post with her husband Eugene, lionized Alinsky and his movement in a six-part series titled “The Orderly Revolution.” President Truman ordered 100 reprints of Meyer’s series. By the time Alinsky’s manifesto, Reveille for Radicals, hit the bookstores in January 1946, he was already famous. Reveille became a national bestseller, and Mrs. Meyer began funding Alinsky’s Industrial Areas Foundation.” [Horowitz and Poe, The Shadow Party, pages 58-59.]

Alinsky later published Rules for Radicals: A Pragmatic Primer for Realistic Radicals in 1971 – during the reign of Pope Paul VI.

“It was said of the new Archbishop of Milan that he didn’t hear church bells, he heard factory whistles.

“It is not surprising therefore that on one of his visits to the Archbishop’s residence, Jacques Maritain, the once great Thomastic philosopher, brought with him, Saul David Alinsky, the “Apostle of the Permanent Revolution.” Montini [then Archbishop of Milan, later Pope Paul VI] was so impressed with the man who Maritain called his “warm personal friend” and “one of the really great men of this century,” that the archbishop invited Alinsky to be his guest for a fortnight in order to consult with him on the Church’s relationship to local Communist unions.” [The Right of Sodomy, page 1143]

“Alinsky often worked through the Catholic Church, and at the urging of his friend Jacques Maritain even consulted with the Vatican about development problems in southern Italy.” [digital page 28 of 92]

“Alinsky, Saul D.: Mr. Alinsky and I met twice during October in Boston and during January at Wellesley. Both times he was generous with ideas and interest. His offer of a place in the new Institute was tempting but after spending a year trying to make sense out of his inconsistency, I need three years of legal rigor.” [digital page 45 of 92]

This is the same Hillary Diane Rodham Clinton whose 2016 presidential campaign tactics and rules of ethics arguably mirrored Saul David Alinsky's "Rules for Radicals." Moving on…

On July 17, 1967, during the papacy of Pope Paul VI, the Sacred Congregation for the Doctrine of the Faith replaced Pope Saint Pius X’s 1910 Sacrorum antistitum, Oath against Modernism, with a much less rigorous Profession of Faith.

Arguably, the replacement of the 1910 Sacrorum antistitum Oath against Modernism reopened the modernist floodgate – and the litany of changes attributed to the Second Vatican Council. As a result, July 17, 1967, is a date that will live in modernist infamy.

What do we know about Saul David Alinsky? Alinsky’s persona is best demonstrated by many relevant quotes from his writings and from what others wrote about him. For example:

“Lest we forget at least an over-the shoulder acknowledgment to the very first radical: from all our legends, mythology, and history (and who is to know where mythology leaves off and history begins – or which is which), the first radical known to man who rebelled against the establishment and did it so effectively that he at least won his own kingdom – Lucifer. – Saul Alinsky” [Saul Alinsky, Rules for Radicals, unnumbered page that precedes unnumbered “contents” page] Alinsky holds Lucifer – the devil – in very high esteem.

“What follows is for those who want to change the world from what it is to what they believe it should be. The Prince was written by Machiavelli for the Haves on how to hold power. Rules for Radicals is written for the Have-Nots on how to take it away.” [Saul Alinsky, Rules for Radicals, page 3, opening paragraph of book] Does this remind you of socialism, redistribution of wealth, and Liberation Theology?

“As an organizer I start from where the world is, as it is, not as I would like it to be. That we accept the world as it is does not in any sense weaken our desire to change it into what we believe it should be – it is necessary to begin where the world is if we are going to change it to what we think it should be. That means working in[side] the system.” [Saul Alinsky, Rules for Radicals, Prologue, page xix.] Does this remind you of modernist priests, bishops, archbishops, and cardinals working inside the system?

The book’s publisher also does not hesitate linking Saul David Alinsky with both Barrack Obama and Hillary Clinton:

“Alinsky’s techniques and teachings influenced generations of community and labor organizers, including the church-based group (emphasis supplied) hiring a young [Barack] Obama to work on Chicago’s South Side in the 1980s…Alinsky impressed a young [Hillary] Clinton, who was growing up in Park Ride at the time Alinsky was the director of the Industrial Areas Foundation in Chicago. – Chicago Sun-Times” [Saul Alinsky, Rules for Radicals, review printed on outside back cover of book]

In Saul Alinsky’s Rules for Radicals the word Catholic appears 11 times, the word priest appears 8 times, the word bishop appears 6 times, word cardinal appears once, and the word Lucifer appears once. Some of the context seems innocuous. Some of the context, however, is quite poignant and very relevant to the contemporary Catholic Church in the United States of America. Innocuous, poignant, and relevant quotes follow:

“Each year, for a number of years, the activists in the graduating class from a major Catholic seminary (emphasis supplied) near Chicago would visit me for a day just before their ordination, with questions about values, revolutionary tactics, and such. Once, at the end of such a day, one of the seminarians said, “Mr. Alinsky, before we came here we met and agreed that there was one question we particularly wanted to put to you. We’re going to be ordained, and then we’ll be assigned to different parishes, as assistants to—frankly— stuffy, reactionary, old pastors. They will disapprove of a lot of what you and we believe in, and we will be put into a killing routine. Our question is: how do we keep our faith in true Christian values, everything we hope to do to change the system?” That was easy. I answered, “When you go out that door, just make your own personal decision about whether you want to be a bishop (emphasis supplied) or a priest (emphasis supplied), and everything else will follow.” [Saul Alinsky, Rules for Radicals, page 13]

“…the past two years I have had a special training school for organizers with a full-time, fifteen-month program. Its students have ranged from middle-class women activists to Catholic priests (emphasis supplied) and Protestant ministers of all denominations, from militant Indians to Chicanos to Puerto Ricans to blacks from all parts of the black power spectrum, from Panthers to radical philosophers, from a variety of campus activists, S.D.S. and others, to a priest (emphasis supplied) who was joining a revolutionary party in South America.” [Saul Alinsky, Rules for Radicals, page 63]

What did others write about Alinsky?

A theological study on the Influence of Saul Alinsky on the Campaign for Human Development was published in about 1998. The editor’s note is essentially a synopsis of the theological study:

“The author argues that the Campaign for Human Development, founded in 1969, is U.S. Catholicism's most significant and longest social experiment in the 20th century. A postconciliar response to an America in crisis, the campaign is a unique theological resource in the development of an indigenous North American theology. Central to its uniqueness was the bishops' embrace of the dean of community organizing, Saul David Alinsky.” [Engel, Lawrence J., Influence of Saul Alinsky on the Campaign for Human Development, Theological Study, 1998]

“Radical organizer Saul Alinsky, an early mentor of Senator Hillary Clinton and of many Shadow Party operatives, identified for his disciples the path to power in American politics. Alinsky observed that radicals could achieve revolutionary change without majority support if they understood and exploited the rules of the game. This was the subject of his book, Rules for Radicals. The requirements for a radical power grab were a small core of disciplined activists pushing their agendas and a citizenry sufficiently in the dark about its purposes. In these circumstances, a radical minority could impose its will even on a great democracy such as the United States.” [Horowitz and Poe, The Shadow Party, page xiii.]

“Hillary’s [Clinton] radicalism is deep-rooted and fundamental, bearing the clear imprint of her early mentor Saul Alinsky. Hillary met the Chicago radical through a leftwing church group (emphasis supplied) to which she belonged in high school. They stayed in close touch until Alinsky’s death. Hillary’s 1969 senior thesis at Wellesley College was a 75-page [92-pages including cover sheet, appendix, bibliography, etc.] salute to Alinsky. It contained excerpts of his forthcoming book, Rules for Radicals, which he had allowed Hillary to read before the book’s publication in 1971. Upon her graduation, Alinsky offered Hillary a full-time organizer job with his Industrial Areas Foundation. She declined only because Yale Law School seemed to offer a superior path for infiltrating the Establishment. [Horowitz and Poe, The Shadow Party, page 56.]

“Alinsky was a master of infiltration. He viewed revolution as a gradual—even orderly—process, best accomplished by infiltrating and manipulating institutions with deep roots in the community, such as churches (emphasis supplied), unions, ethnic organizations and local political machines. In Alinsky’s native Chicago, few institutions had deeper roots or wider influence than organized crime. The pragmatic Alinsky wooed gangsters as lovingly as he courted ward bosses, bishops (emphasis supplied) and school superintendents.” [Horowitz and Poe, The Shadow Party, page 57.]

All of that being said, you have to wonder whether we are living with the fruits of Alinsky style radical Catholic modernism.

Christ suffered and died for our sins; as the source of [our] eternal salvation; and, the cause of [our] eternal salvation. Christ did not suffer and die for redistribution of wealth, liberation theology, that we might care for our common home, that a gay activist group might march in New York’s annual St. Patrick’s Day parade, or that we might dance the tango in the church sanctuary.

Is it time to investigate history and learn what is really at stake at this moment in time?

History may well show what impact Saul David Alinsky did or did not have on Pope Paul VI, on the Second Vatican Council, and on contemporary radical modernist Catholicism – especially in the United States of America.

[Comment Guidelines - Click to view]
The Remnant values the comments and input of our visitors. It’s no secret, however, that trolls exist, and trolls can do a lot of damage to a brand. Therefore, our comments are heavily monitored 24/7 by Remnant moderators around the country.  They have been instructed to remove demeaning, hostile, needlessly combative, racist, Christophobic comments, and streams not related to the storyline. Multiple comments from one person under a story are also discouraged. Capitalized sentences or comments will be removed (Internet shouting).
The Remnant comments sections are not designed for frequent personal blogging, on-going debates or theological or other disputes between commenters. Please understand that we pay our writers to defend The Remnant’s editorial positions. We thus acknowledge no moral obligation whatsoever to allow anyone and everyone to try to undermine our editorial policy and create a general nuisance on our website.  Therefore, Remnant moderators reserve the right to edit or remove comments, and comments do not necessarily represent the views of The Remnant.
back to top
Last modified on Thursday, January 5, 2017
Tweet

More in this category: « Happy New Year: An End-of-the-Year Remnant Update The Sound of Neo-Catholics: On Gathering Rites and Hippies »