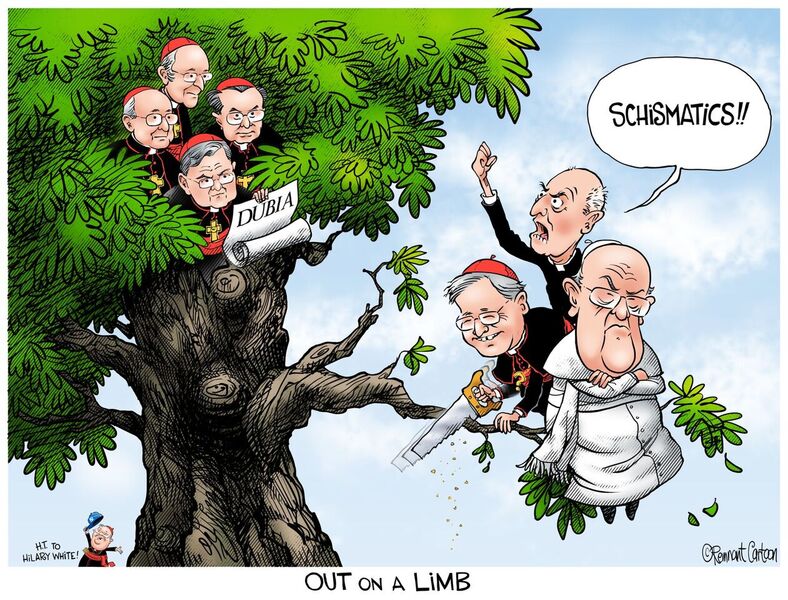 As the mayhem and destruction of the Bergoglian Wrecking Ball continues, and continues to escalate almost daily, we are seeing more and more examinations of canon law and theology around the question, “Is it possible for a reigning pope to be a schismatic?” Now, I’m not a canonist or a theological scholar. I’m really just someone who knows how to ask people questions. So I don’t pretend to have the answers to that question and all the other related questions that grow logically from it.

Together, these things make it easy to understand that when Our Lord says anyone who tries to divorce and marry again is an adulterer, and when the Church teaches based on this that such people cannot receive Holy Communion, anyone who says that they can is wrong. Whether he is honestly mistaken or actually a nefarious evildoer bent on destroying the very fabric of reality is of no concern to me. He’s wrong either way, and we cannot follow him, whether he is a priest, a bishop, a cardinal, a pope or an angel from highest Heaven. Yes and no cannot both be the same. Reality is the way it is. A = A.

So, I’m afraid I become somewhat impatient with people who are panicking. What is there to panic about? We know the Faith. We know what reality is. We know that God does not abandon those who remain faithful to Him, though all the world are against them. None of that matters.

Equally, it doesn’t matter what it will look like. What will it look like, this schism that Bergoglio and his friends are currently helping to bring to final fruition – the same that has been bubbling away for 50 years? What will the world say when a tiny group of recalcitrant “ultraconservatives” call a press conference to declare that Jorge Bergoglio has lost the charism of the papacy and that anyone who follows him is no longer in union with the One Holy Catholic and Apostolic Church? It will look very much like what it does now.

The Bergoglian sect, as we must then call it, will continue to dress and look to the world like Catholic churchmen. They will continue to occupy all or nearly all of the properties, from the Vatican to the local parish. All the world and its institutions; the media, academia, international finance and law, organisations like the EU and the UN, all the nations that currently have diplomatic relations with the Holy See, will call the Bergoglian sect the Catholic Church.

None of that matters at all. A shell of a Church that looks Catholic on the outside but preaches a creed opposed to Christ cannot be the Catholic Church. The Real is what it is; A = A. A thing is the same as itself and not the same as some other thing. Two opposed things cannot both be true. Yes cannot be the same as no.

These will be difficult things to do, they will be real privations and losses, no mistake. But for these losses we have already been promised eternal glory. And for every person in these kinds of difficulties, there is an opportunity for grace for someone else. The more difficulties we all face, the more we can step in and help each other in real and concrete ways. And the more we will be drawn together in authentic Christian solidarity.

These things have all happened before. Many times and not that long ago. I know a man who was ordained in a Soviet state who did all his studies for the priesthood while operating a crane in a wire factory, hiding his books under his jacket. We know that Japanese believers held on to the Faith through centuries without any clergy whatever – they had the Rosary and remembered Our Lady. They had catechesis that was passed on orally. And they remembered their martyrs. We know there are Chinese martyrs, both white and red, doing these things right now.

The Faith cannot die, because the God who died has risen from the dead, has conquered death forever. The Church cannot be killed. The people currently trying to kill it don’t believe this, but that doesn’t matter either.

People have asked me how it can possibly make sense that a pope can “go into schism” or be “fomenting schism” or even be a formal heretic. And I agree, it seems outrageous, almost impossible. For many the thought has been almost logically excluded by the false syllogism of papal positivism: “The faith comes from the pope, and whatever the pope says is the faith, therefore…” But it is false.

I maintain that this pontificate of destruction is not destroying the Catholic Church. Of course it isn’t. But it is destroying these false conceptions, these false syllogisms, that have grown up since the First Vatican Council and were corroding everyone’s faith. Papal positivism is a kind of theological illness in the modern Church, sadly fomented by the popes themselves since the catastrophe of the Second Vatican Council. We all looked to the “orthodox” John Paul II to pull us out of the Church’s tailspin. And for many, faced with blatantly heretical and often evil bishops, the pope became the first and last guarantor of the Faith. It is easy to see how this problem grew. But here it stops. And for the good of souls.

People are lamenting all over, “Bergoglio is destroying the Church!” But this indicates little more than the lamenter’s lack of faith. No, he isn’t. But he is doing a fine job of bringing down the false thing, that anti-Church that has all but subsumed the Church of Christ. And that is a fine thing to watch.

He and all his friends have chosen to sit on a rotting branch, a branch that has been dead for 50 years and was ready to fall off anyway. They are energetically sawing away at it, and it will come down soon, to be sure. Meantime, the Faith is still the Faith. The Real is still the Real. Yes does not mean the same thing as no. A = A.

St. Athanasius put it better than I ever could:

“May God console you! ... What saddens you ... is the fact that others have occupied the churches by violence, while during this time you are on the outside. It is a fact that they have the premises – but you have the Apostolic Faith. They can occupy our churches, but they are outside the true Faith. You remain outside the places of worship, but the Faith dwells within you. Let us consider: what is more important, the place or the Faith? The true Faith, obviously. Who has lost and who has won in the struggle – the one who keeps the premises or the one who keeps the Faith? True, the premises are good when the Apostolic Faith is preached there; they are holy if everything takes place there in a holy way ...

“You are the ones who are happy; you who remain within the Church by your Faith, who hold firmly to the foundations of the Faith which has come down to you from Apostolic Tradition. And if an execrable jealousy has tried to shake it on a number of occasions, it has not succeeded. They are the ones who have broken away from it in the present crisis. No one, ever, will prevail against your Faith, beloved Brothers. And we believe that God will give us our churches back some day.

“Thus, the more violently they try to occupy the places of worship, the more they separate themselves from the Church. They claim that they represent the Church; but in reality, they are the ones who are expelling themselves from it and going astray. Even if Catholics faithful to Tradition are reduced to a handful, they are the ones who are the true Church of Jesus Christ.”

So it only remains to ask, what must we do? And the Church has the same answer for us that she has always given: instruct the ignorant; counsel the doubtful; admonish sinners; bear wrongs patiently; forgive offenses; console the afflicted; pray for the living and the dead.

Is it as simple as that? Keep doing the thing we’ve always known we should?

Yes. It’s as simple as that. If you aren’t doing them now, start. If you are, do them a bit more. And help someone else to start doing them or to do them a bit more. Help someone you know to stop lamenting and give up papal positivism. Honestly, there has never been a more useful pontificate for finding teaching opportunities. People are upset; and we have the solution.

And there has never been a time in human history when the information we need has been more accessible. We all carry a device around with us that gives us access to all the teaching of the Church, the Fathers, Doctors, saints and popes. All of the Summa is in your pocket right now.

But most of all, remember to thank God for the Faith He has given you, and sustained in you. It could easily have been different.

[Comment Guidelines - Click to view]
The Remnant values the comments and input of our visitors. It’s no secret, however, that trolls exist, and trolls can do a lot of damage to a brand. Therefore, our comments are heavily monitored 24/7 by Remnant moderators around the country.  They have been instructed to remove demeaning, hostile, needlessly combative, racist, Christophobic comments, and streams not related to the storyline. Multiple comments from one person under a story are also discouraged. Capitalized sentences or comments will be removed (Internet shouting).
The Remnant comments sections are not designed for frequent personal blogging, on-going debates or theological or other disputes between commenters. Please understand that we pay our writers to defend The Remnant’s editorial positions. We thus acknowledge no moral obligation whatsoever to allow anyone and everyone to try to undermine our editorial policy and create a general nuisance on our website.  Therefore, Remnant moderators reserve the right to edit or remove comments, and comments do not necessarily represent the views of The Remnant.
back to top
Last modified on Friday, December 30, 2016
Tweet