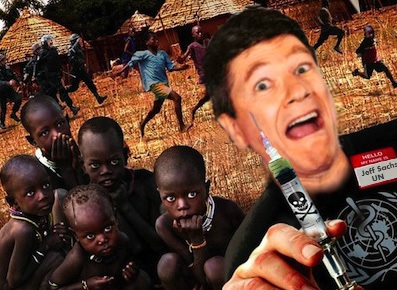 The globalists are so predictable and easily identifiable. Watch their language and follow their tactics. They never change. They sing from the same global warming alarmist hymnal as they import and traffick in their own arrogant brand of leftist ideology and self-imposed globalist solutions. They exploit and terrorize the poor with fear-baiting predictions to induce compliance with the dictates of the New World Order elites.

Africa is in their crosshairs.

This cynical tactic was on display during a speech on globalization in Johannesburg, South Africa this week. None other than Jeffrey Sachs, Columbia University professor of economics, UN uber technocrat, Vatican papal advisor, globalist guru of sustainable development, warned that the population growth in Africa remains out of control and sent out the alarm that the continent could not develop sustainably with nearly 4 billion people.

Simply put, the dark continent must stop having so many children, insists the white man from his ivory tower.

Welcome to the New World Order of the Globalist’s vision of the world where the UN elites admonish the vast uneducated and unwashed with their haughty and pre-ordained formula for success and sustainable development, while posing as caring humanitarians seeking the best for the poor and illiterate. They promise education, poverty eradication, full employment, climate perfection, a virtual utopia on earth, if and only if, Africa follows the repressive decrees of the United Nations and its trans nationalists bureaucrats.

Throughout his peripatetic world travels, Jeffrey Sachs reigns as the globalist guru. His Johannesburg speech reflects his common globalist refrain.   He reinforces the UN message in South Africa by arguing that the education of African girls is the single most important determinant of future economic growth.

When UN bureaucrats talk to Africans about education for girls, read it as a code language for the UN proliferation of sexual reproduction health education for girls. The UN infiltrates Africa with reproductive health services for girls at the earliest age possible to ensure the reduction in the birth rate of black children. The tyrannical hubris from this white man is staggering who self-proclaims as the arbiter over a suitable size of the African black man’s population.

In his South African speech, Sachs wields the sledge hammer of globalism, as he pontificates that, “the overwhelming issue is that girls are not enabled to stay in school long enough, to delay marriage, enter the labour market and to choose to have two children rather than five or six.” Here’s the UN/Sachs despotic command: You, Africans, need to “limit your families to two children,” says the white man who has three children of his own.

Listen to the globalist’s promises as Sachs imperiously instructs South Africans, “This is really important and it is another reason why education is so fundamentally core to ending poverty and achieving sustainable development in Africa.” The holy grail of UN sustainable development, dictated by a ruling elite, serves as the globalists’ First Commandment of the New World Order. Honor the UN in the name of Sustainable Development. Submit to its authority as the dominant power and final word on all things sustainable.

Fear mongering is the #1 tactic of the global elites, by intimidating with angst and alarm of imminent global collapse. Globalists employ this device to motivate action and compliance by the naive populace. Concocting impending alarm and catastrophe fuels the globalist’s agenda without the need for factual proof. Jeffrey Sachs, the Vatican’s expert routinely rails at papal conferences that the “world is at the tipping point.” Here are just a few of his fatalistic nuggets taken from the alarmist playbook employed and ratified at the Vatican and elsewhere:

•   “The world is headed to a catastrophic environmental trajectory”

•   “Nuclear threat is equal to the environmental catastrophe unless we choose and alternative force. The damage that humanity is creating thru the biosphere and reorient our actions.”

•   “Humanity is so numerous, and heavily using the earth’s basic resources in an unprecedented way. Fundamental changes of earth in the hands of human beings. (Globalists always blame too many people).

•   The pace of change is so extraordinary that we are in imminent peril on the planet.”

Those examples are just some of the globalists’ scare tactics. Has Sachs sufficiently alarmed you? Better turn off the lights, charge up the windmill, store up on contraceptives, and stop breathing. The Soros-funded shock troops are coming to control your life.

In the rush to intentionally skewer our vision and reason, the globalist pushes the panic button with one hand, and offers a magical solution with the other. At once, both seer and savior, the globalist places humanity at his beck and call. A glaring indicator of the new world order is the brazen apocalyptic siren which repeatedly sounds that the end is near. This end is not the second coming of the Lord, but rather the imminent destruction of the earth by man’s own dastardly carbon footprint.

This appeared in the latest print edition of The Remnant. What else did you miss? Subscribe today and help keep this website free.

Female fertility is the mortal enemy in this global battle. This population control initiative is a carefully coordinated and fully funded strategy by the United Nations, its partner Planned Parenthood Federation, and various UN agencies, NGOs and Soros. The New World Order elites self-ordain, calculate and dictate the appropriate population of the continent of Africa, and its 54 countries.

The United Nations bureaucratic bean counters now predict that Africa’s population of roughly 1 billion people will reach almost 4 billion by the year 2100 (its so-called medium forecast). Enter Jeffrey Sachs, the UN population control proponent, who jests around the globe dispensing demographic dictates to the dark corners of the world.

Location of abortion mills in the inner city proved an effective master plan for the population control proponents. New pregnancy statistics from the New York City Department of Health and Mental Hygiene for 2013 demonstrate the shocking results that 54.6 percent of black babies in healthy pregnancies were aborted that year. This means 79 black babies are aborted in the city every day and 66 are born alive. In other words, for every 1,000 black babies born in New York City every year, 1,200 are aborted.

This finely hewed demographic tactic is underway on the continent of Africa with the indoctrination campaign of phony man caused climate change and faux population explosion.

Are you paying attention, Africa? The climate is changing. The global elitists have determined that black lives are not sustainable.

[Comment Guidelines - Click to view]
The Remnant values the comments and input of our visitors. It’s no secret, however, that trolls exist, and trolls can do a lot of damage to a brand. Therefore, our comments are heavily monitored 24/7 by Remnant moderators around the country.  They have been instructed to remove demeaning, hostile, needlessly combative, racist, Christophobic comments, and streams not related to the storyline. Multiple comments from one person under a story are also discouraged. Capitalized sentences or comments will be removed (Internet shouting).
The Remnant comments sections are not designed for frequent personal blogging, on-going debates or theological or other disputes between commenters. Please understand that we pay our writers to defend The Remnant’s editorial positions. We thus acknowledge no moral obligation whatsoever to allow anyone and everyone to try to undermine our editorial policy and create a general nuisance on our website.  Therefore, Remnant moderators reserve the right to edit or remove comments, and comments do not necessarily represent the views of The Remnant.
back to top
Last modified on Tuesday, November 29, 2016
Tweet

More in this category: « First Sunday of Advent – What Does It Mean? Pulling Back the Veil: Orthodox Patriarch Defends Francis »