Goodnight, Mrs. Clinton (A Partial-Birth Campaign Is Laid to Rest) 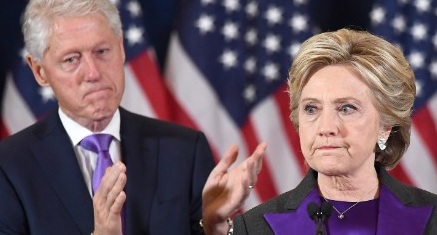 Well, I guess Mrs. Clinton now knows what it feels like to be aborted so close to her due date.

Still, ever since I was a boy it always seemed to me that the thrill of victory is not nearly as powerful as the agony of defeat. If Mrs. Clinton had achieved victory last night, today would seem the darkest in history. The future would be beyond dire for a people that willingly raised up a corrupt and immoral radical, who hates the laws of God, defends the murder of babies, and zealously works for the destruction of the family.

Had she been elected it would have said much more about us than about her. We would've exposed ourselves as a soulless and heartless people, beyond hope and beneath contempt.

There was so much at stake. Much of our work here at The Remnant, for example, would have been criminalized over the next four years. Our homeschools were to become illegal enterprises in the village Mrs. Clinton had in mind. Even our ability to move about freely would have been undermined by Mrs. Clinton who had promised to expand the 'no fly' list against "haters". (As the “leader of a hate group”, according to the infamous Southern Poverty Law Center, it isn’t difficult for this writer to imagine how enthusiastically President Hillary would have enforced hate crime legislation against Christian America.)

So, yes, like everyone else, we’re still trying to process the news of this truly awesome political and moral and even spiritual upset (if Trump repeals the Johnson Amendment, even the Catholic Church in this country might become relevant again).  There’s much to learn from what we saw last night, not the least of which is that the mainstream media, far from omniscient, are in fact clueless ideologues never to be trusted again.

No matter what happens with a Trump presidency, we now know that a substantial percentage of the American people are not beyond hope—that they still have enough Christian sense to recognize and reject the demonic when they see it. And what’s the takeaway from that? Demons are not invincible. In fact, last night they had their tails handed to them by a “buffoon” they’d mercilessly mocked for 18 months, and who decided he’d be the first politician in decades to give God-fearing Americans a voice again—a comparative small concession that nevertheless reduced the howling left-half of this country to bitter tears and a stunned silence.

Donald Trump found a way to free pro-life, pro-God, pro-family Americans from their shackles, causing the demons to scatter before them like cockroaches.  And just as many of us voted for Donald Trump to stop Hillary Clinton, we can now celebrate without apology the landside defeat he handed The All-Powerful Ones: George Soros, Pope Francis, Planned Parenthood, big media, big Hollywood, the United Nations, the European Union and the rest of the New World Order fanatics.

Down in the sewers even the rats are rending their little pelts. Miley Cyrus has to leave the country, as she promised she would if Trump won (see ya, Miley. Don't let the door hit you in the backside).  Reverend Al Sharpton also needs an offshore realtor, as do Whoopi Goldberg, Tom Hanks, Bruce Springsteen, Ellen and the rest of the “elites” with the long tails and pointy noses.

Hollywood is weeping tears of acid this morning, and for that we've got to give lots of kudos to Donald Trump.

Bad guys, demons, pro-aborts, the anti-family crowd—they all lost last night, and lost “bigly”. And — horror of all horrors! — their defeat was handed to them by folks standing outside abortion clinics, running rosary beads through their fingers, begging Heaven to intervene, asking Our Lady to give our nation a little more time to wake up and come back to its senses. They lost, in other words, to the “little people” — folks driving minivans full of kids, clinging to their bibles and guns, living out there in that basket of deplorables where God and family still matter more than government handouts and the right to kill babies.

Obviously, all of this must be kept in perspective. Donald Trump was elected last night—not St. Thomas More. There will be disappointments coming out of the Trump White House, I’m sure of it. Let us not deceive ourselves about that, and let’s be realistic: America has a long, long way to go if she is to return to sanity. Our country is still in de facto rebellion against God. We’re not out of the woods, not even close. But hell suffered a setback last night, and nothing can change that now-historical reality.

So let us pray that President Trump can take steps, even baby steps, to reverse engines and change course. Our expectations are modest, to say the least, but not without hope and certainly not without a firm conviction that the alternative came from the bowels of hell itself and would have dealt a deathblow to Christian America.

Yesterday’s losers are today's best cause for hope. That crushing defeat proves that the evil ones, though powerful, are not invincible. They can be resisted, even defeated. Whether you like the man or not, Donald Trump has proven beyond any doubt that the war for God, family, and the unborn in this country is far from a lost cause.

That low groaning we hear all across America today offers audible proof of this -- it is the sound of demon teeth gnashing. And for that, whatever reservations we may have about our new president to be, decent Americans can raise a “joyful noise unto the Lord” as they breathe a national sigh of relief.

With cautious optimism moving forward, we thank God for the miracle that is the defeat of the pro-abort, pro-sodomy, anti-American Hillary Rodham Clinton. And we thank Donald Trump for taking a stand on behalf of good people whose voice has been silenced in this country for far too long. Last night they spoke out, and their newfound voice was heard around the world . . .  changed history, in fact.

Pray for Donald Trump. He’s not Catholic, and thus doesn’t have the benefit of the Sacraments. And yet all the powers of hell are going to ally themselves against him over the next four years. He needs our prayers, whether he realizes it or not.

May God bless America, and may Americans use this reprieve to get down on their knees and bless God for His mercy on us -- mercy of which we are so richly undeserving.

[Comment Guidelines - Click to view]
The Remnant values the comments and input of our visitors. It’s no secret, however, that trolls exist, and trolls can do a lot of damage to a brand. Therefore, our comments are heavily monitored 24/7 by Remnant moderators around the country.  They have been instructed to remove demeaning, hostile, needlessly combative, racist, Christophobic comments, and streams not related to the storyline. Multiple comments from one person under a story are also discouraged. Capitalized sentences or comments will be removed (Internet shouting).
The Remnant comments sections are not designed for frequent personal blogging, on-going debates or theological or other disputes between commenters. Please understand that we pay our writers to defend The Remnant’s editorial positions. We thus acknowledge no moral obligation whatsoever to allow anyone and everyone to try to undermine our editorial policy and create a general nuisance on our website.  Therefore, Remnant moderators reserve the right to edit or remove comments, and comments do not necessarily represent the views of The Remnant.
back to top
Last modified on Thursday, November 10, 2016
Tweet

More in this category: « Sunday Sermon: A Call to Pray for America The Religion of Peace? (Jihad Watch's Robert Spencer Interview) »