Behind the Bronze Doors: Soros Radicals collude with Vatican Featured 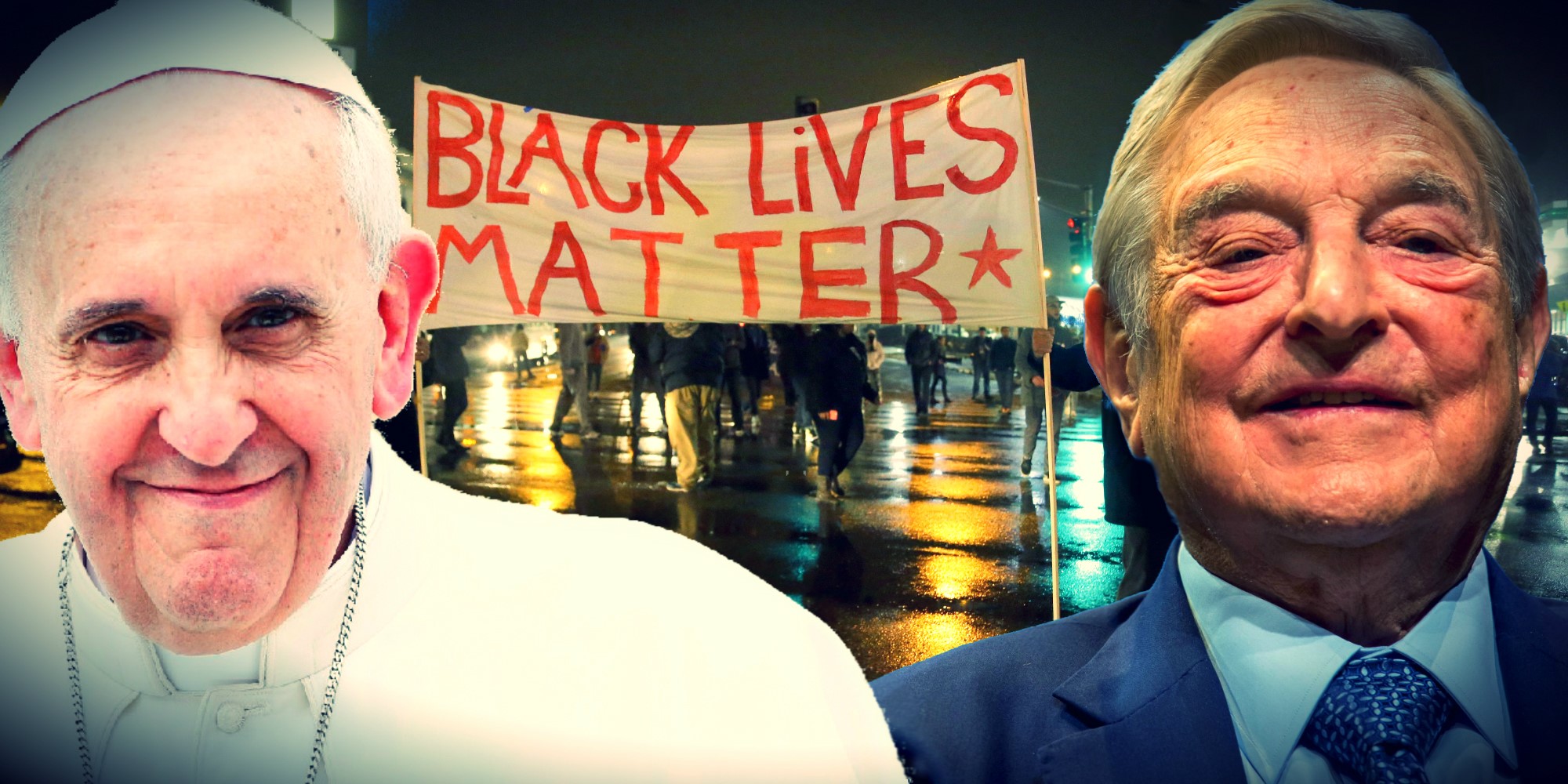 "All effective actions require the passport of morality.”
~ Saul Alinsky, Rules for Radicals

Drip, drip, drip. The Tiber is overflowing with leaks from WikiLeaks documents which reveal the relationship between notorious George Soros operatives and high level Vatican prelates. They expose that the enemy scaled the Vatican wall and is now ensconced behind the Bronze Doors of St. Peter’s.

In August 2016, the first batch of shocking emails were disclosed in the DCLeaks dump which uncovered George Soros’ Open Society documents confirming the close collaboration between Soros operatives and the Vatican, highlighted in a Soros Open Society U.S. Board Meeting Report in May 2015. The notes discussed the expenditure of $650,000 to PICO to organize activities to engage Pope Francis on economic and racial issues:

Pope Francis’ first visit to the United States in September will include a historic address to Congress, a speech at the United Nations, and a visit to Philadelphia for the “World Meeting of Families.” In order to seize this moment, we (Open Society) will support PICO’s organizing activities to engage the Pope on economic and racial justice issues, including using the influence of Cardinal Rodriguez, the Pope’s senior advisor, and sending a delegation to visit the Vatican in the spring or summer to allow him to hear directly from low-income Catholics in America.

The purpose of the Soros/Vatican collaboration was to coordinate the Pope’s U.S. address with the Clinton campaign. Soros sought to align Clinton campaign talking points with the Pope speeches during his U.S. trip. The goal of the PICO grant seeks to reinforce mutual concerns between the Pope and Clinton’s campaign agenda and bootstrap the popular Pope to reinforce the campaign themes of the democratic candidate in hopes to influence the 2016 U.S. Elections. Soros is funding an array of Clinton campaign operations to the tidy sum of $25 million. Soros understands that it is crucial to split and dilute the Catholic vote by using the Pope’s social justice agenda as a proxy for the Democratic platform.


What is PICO, the $650,000 grant recipient who will organize activities to engage the Pope on economic and racial justice activities? According to KeyWiki, PICO is “a progressive national network of faith-based organizations". PICO was founded in 1972 by John Baumann, a Jesuit priest trained in Saul Alinsky community organizing in Chicago in the 1960s.

Open Society and PICO identify Cardinal Oscar Rodriguez Maradiaga, the highly favored Francis appointee who heads the Pope’s prestigious 9 Cardinal Cabinet. Cardinal Rodriguez serves as the sympathetic and willing conduit to promote their mutual globalist cause. Soros’ people cleverly and accurately identified the most powerful prelate in the Vatican to advance the radical Soros agenda. How cunning!

The details of the PICO Vatican trip were reported in a revealing email to John Podesta, Chairman of the Clinton Presidential Campaign. With the most recent Wikileaks document release of John Podesta’s email, Catholics now know the details of the Soros funded PICO junket to the Vatican. As Francis would say, “The God of Surprises” does not disappoint; The trip was a resounding success!

The goal of the trip was to ensure a collaborative theme with the Vatican in order to assist in organizing for these democratic operatives. The Vatican served as a willing accomplice to the Alinsky playbook of the Democratic party:

“At the end of the day, our visit affirmed an overall strategy: Pope Francis, as a leader of global stature, will challenge the “idolatry of the marketplace” in the U.S. and offer a clarion call to change the policies that promote exclusion and indifference to those most marginalized. We believe that this generational moment can launch extraordinary organizing that promotes moral choices and helps establish a moral compass. We believe that the papal visit, and the work we are collectively doing around it, can help many in our country move beyond the stale ideological conflicts that dominate our policy debates and embrace new opportunities to advance the common good.”

According to the leaked Podesta email, the Vatican rolled out the red (pun intended) carpet for the PICO delegation flush with Soros funded Black Lives Matter pastors of various faith denominations. The leaked June 18, 2015 email provided a detailed and glowing meeting summary to John Podesta, chairman of the Clinton Campaign and George Soros confidante and grantee:

“PICO sent a 15 delegation of clergy, leaders and staff to visit the Vatican last week. Cardinal Rodríguez, following our conversations with him in Philadelphia, helped facilitate our visits.”

“Our team included several PICO African-American pastors deeply involved in Black Lives Matter (Soros funded) work including a Pastor from St. Louis who is on the Ferguson commission; Rev. Alvin Herring, our Deputy Director, who has worked closely with clergy in Baltimore; a DREAMer from Florida; a priest from California who was formerly undocumented himself; a Black Catholic Deacon who is leading our work on mass incarceration in New Orleans; and two workers from SEIU helping to lead the Fight for 15 workers. I was proud to be standing with this amazing group.”

Is this the nature of the inter-faith dialogue that Pope Francis constantly imposes on the Catholic faithful? Francis foists inter-religious dialogue because “Only through dialogue – he says – will we be able to eliminate intolerance and discrimination. Inter-religious dialogue is a necessary condition for world peace.”   Tell that to the business owners of Ferguson whose buildings were burned to the ground by BLM anarchists. Based on these emails, the Vatican’s inter-faith dialogue appears to be a radical social justice rant with Soros operatives and union political organizers. Good to know.

As the email indicated, the PICO operative raved about “this amazing group.” What did this amazing group discuss while at the Holy See? Did they chat about the massive closures of black Catholic churches in the inner city?   Did they discuss the strategic targeting of poor black women by Planned Parenthood for abortions? Did they discuss the tragic disintegration of black families and the soaring out of wedlock black births? Not likely.

George Soros, the global proponent of abortion on demand, dispatched his operatives to the Vatican with specific marching orders. The topic of the three day junket with the Vatican cardinals was dominated by the radical left agenda of George Soros and the Democratic Party:

Our visits were dialogues. We conveyed our view that the Pope is a World leader of historical significance; that his message of exclusion, alarm over rising inequality and concern about globalized indifference is important for the U.S. to hear and see animated during his visit; and that we intend to amplify his remarks so that we have a more profound moral dialogue about policy choices through the election cycle of 2016. In our meetings with relevant officials, we strongly recommended that the Pope emphasize – in words and deeds – the need to confront racism and racial hierarchy in the US.”

The purpose of the Vatican trip, and Soros grant laid the groundwork for the presidential campaign. The Soros hacks “dialogued” with the Vatican cardinals about the lofty theology of the politics of race baiting. Clearly PICO, on orders from Soros, urged the Vatican officials to emphasize the democratic talking points of inequality and exclusion during the election cycle of 2016. In other words, let’s ensure we are on the same page so that Hillary Clinton is elected.

This Vatican PICO visit was strategically timed to set the stage for the Pope’s U.S. visit to speak about the issues intrinsic to the Democratic Party platform: race and inequality. Soros understands that his democratic flacks must shore up the black voter base by reinforcing racism and voter angst. Who better than the popular and moral leader, Pope Francis to promote their democratic party theme. Not surprisingly, the Vatican reception to the Soros radicals was overwhelmingly warm and effusive.

“Conversations that were originally scheduled for thirty minutes stretched into two hour dialogues. As in our breakfast conversation with Cardinal Rodríguez, senior Vatican officials shared profound insights demonstrating an awareness of the moral, economic and political climate in America. We were encouraged to believe that the Pope will confront race through a moral frame.”

The Pope’s inner circle signaled to the Soros operatives that Francis would address race, apparently through the faux prism of the Ferguson riots and Soros-funded Black Lives Matter riots. According to Cardinal Rodriguez, Pope Francis would lend his moral voice to the political landscape and issues ginned up by George Soros and his Alinsky inspired radicals.

PICO and Soros seized the opportunity to exploit the moral authority of the papacy to foment the political action of Black Lives Matter, the Democratic party’s Soros funded activists. The trip was well worth the $650,000 spent by Soros. A final assessment gloated about the progress at the Vatican:

“I appreciate your continued involvement in this project and would be happy at any time to sit and think with you about the opportunities around the papal visit. My team is working intensively with partners to plan an expanded set of activities through the end of the year.”

“The world need a New World Order and I am here to alert you that we are entering a period of world disorder.” ~George Soros, Davos, 1995

Soros money buys world disorder. World disorder creates the breeding ground for a New World Order. As the ancient Chinese military general, Sun Tzu strategized, “in the midst of chaos, there is also opportunity.” Soros understands this demonic dynamic. Accordingly, he puts his billions to work.

George Soros provided $33 million in one year to support the grass-roots, on-the-ground race baiting activists in Ferguson, according to the most recent tax filings of his nonprofit Open Society Foundations. The Black Lives Matter activists created chaos and anarchy in Ferguson under a phony trumped up police brutality scenario with Soros millions. Hence, agitate the democratic party base of black voters.

The topic of salvation of souls is now replaced in Vatican meetings with the salvation of the Democratic party. Politics of the radical leftists Alinskyites dominate the discussions at the Vatican. Prominent curial Cardinals devote three days to the agenda of George Soros, self declared atheist, the most virulent global promoter of abortion, euthanasia, manufactured chaos, and the New World Order.

A New World Order is now entrenched at the Vatican.

[Comment Guidelines - Click to view]
The Remnant values the comments and input of our visitors. It’s no secret, however, that trolls exist, and trolls can do a lot of damage to a brand. Therefore, our comments are heavily monitored 24/7 by Remnant moderators around the country.  They have been instructed to remove demeaning, hostile, needlessly combative, racist, Christophobic comments, and streams not related to the storyline. Multiple comments from one person under a story are also discouraged. Capitalized sentences or comments will be removed (Internet shouting).
The Remnant comments sections are not designed for frequent personal blogging, on-going debates or theological or other disputes between commenters. Please understand that we pay our writers to defend The Remnant’s editorial positions. We thus acknowledge no moral obligation whatsoever to allow anyone and everyone to try to undermine our editorial policy and create a general nuisance on our website.  Therefore, Remnant moderators reserve the right to edit or remove comments, and comments do not necessarily represent the views of The Remnant.
back to top
Last modified on Monday, October 24, 2016
Tweet

More in this category: « A Word from the Editor of The Remnant: Special Offer, Brief Introduction Arrivederci, Italia: Italian Bishops Throw in with Belial »