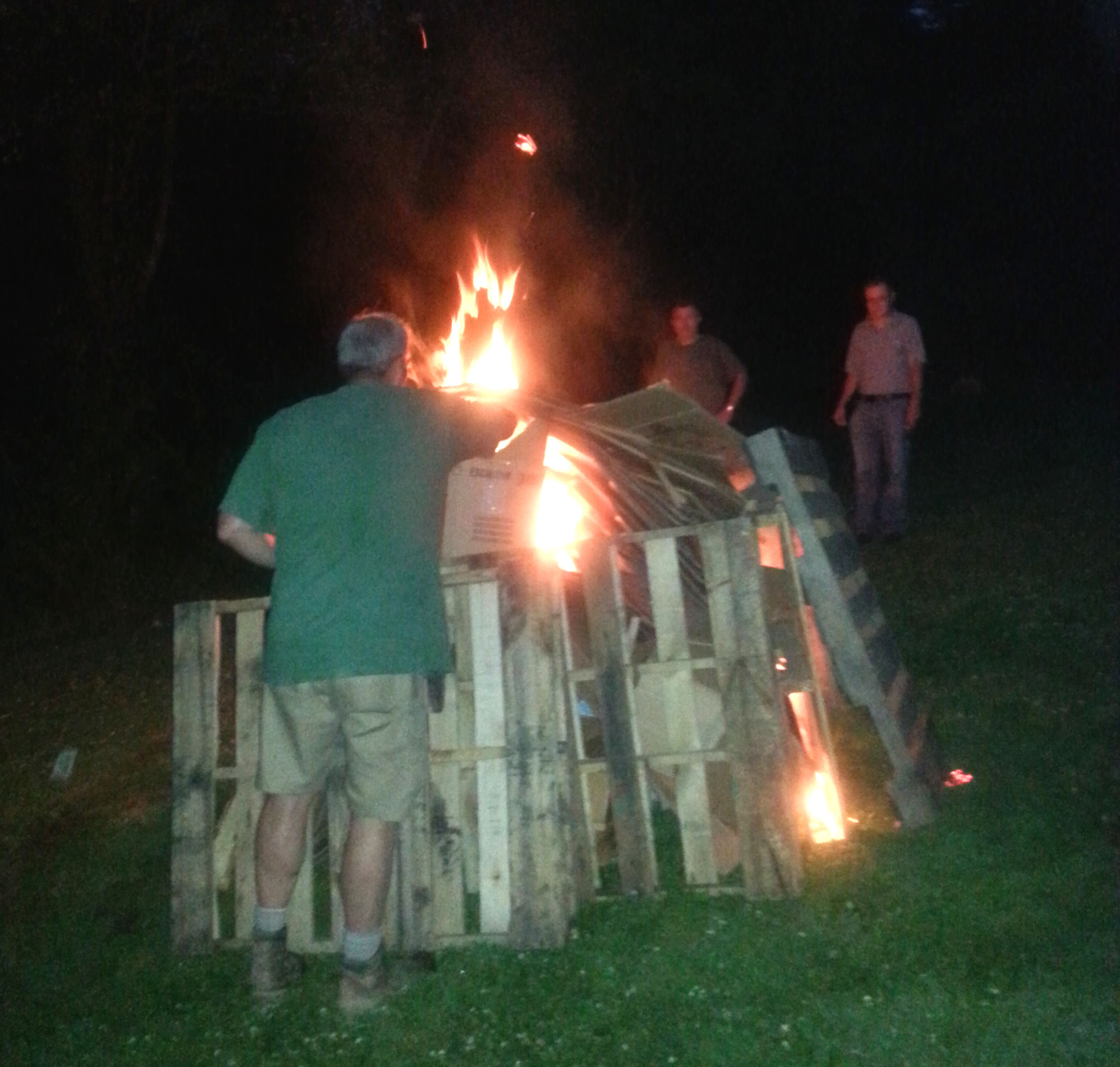 The formula for the “Blessing of a Bonfire on the Vigil of the Birthday of St. John the Baptist conferred by the clergy outside of church” can be found in blessing #25 of The Roman Ritual, Volume III – The Blessings, translated and edited by Father Philip T. Weller (1946).   The opening prayer reads as follows, as the fire is lit at dusk:

“O Lord God, Father almighty, unfailing Ray and Source of all light, sanctify this new fire, and grant that after the darkness of this life we may come unsullied to Thee Who art Light eternal. Through Christ our Lord. Amen.”

“The blessing of a bonfire may seem somewhat extraordinary. Nevertheless, the ceremony is one of the most ancient blessings in Catholic hagiolatry. For centuries people of Christian countries have kept a solemn vigil for the festival of John the Baptist’s birth. In the darkness of the night preceding the feast, a bonfire would flare up before the church edifice, in the market-place, on hill, in valley…The custom of Saint John bonfires, indicative of a people with burning and childlike faith, continues in some places to this day.”

The Vigil of the Birth of Saint John the Baptist (June 23rd) occurs around the time of the Summer Solstice in the Northern Hemisphere (June 20, 2016) after which time the length of daylight hours begins to steadily decrease each day. This calls to mind the words of Saint John the Baptist in regards to the One True Light of the World, Jesus Christ: “He must increase, but I must decrease” (Jn 3:30). In contrast, Our Lord Jesus Christ was born around the Winter Solstice (December 21, 2016) from which time the light of day will become greater going forward. 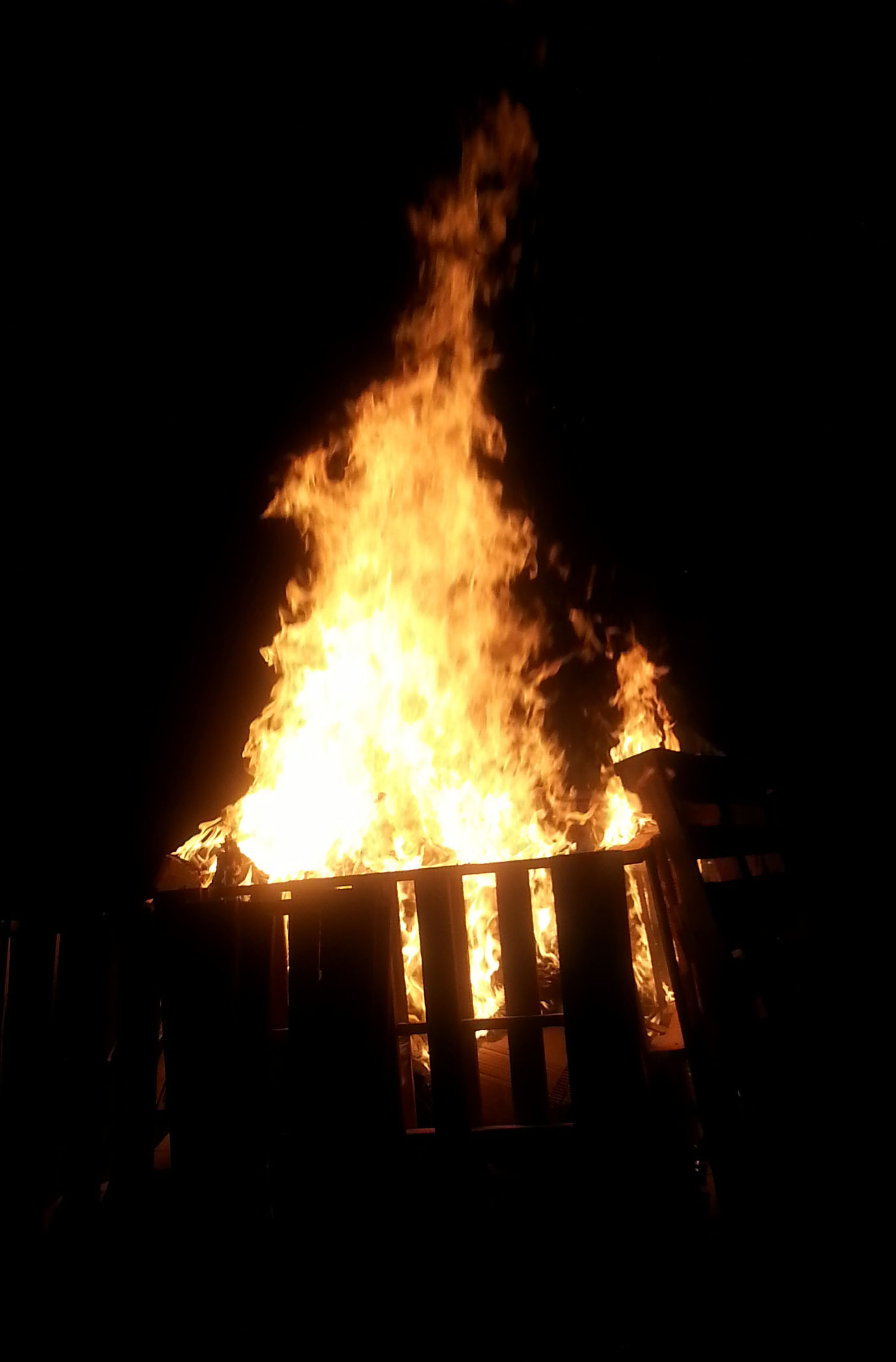 This theme of Saint John the Baptist testifying to the true light of Christ, while not himself being the light, is reverently read by the Priest as the “Last Gospel” of the Traditional Latin Mass (Jn 1: 1- 14). In this Last Gospel, the word “light” is mentioned six times. Accordingly, I read this Gospel passage to the faithful as a prelude to lighting the bonfire. One can see why the ancients associated bonfires with the celebration of the birth of the Baptist. The vigil bonfire usually is allowed to burn past midnight, leading into the birthday of Saint John.

One of the practical features of the blessed bonfire is the opportunity to reverently dispose of worn out and broken sacramentals, such as old scapulars. This saying of farewell to our beloved objects of devotion follows the blessing prayers. The unusable sacramentals are then placed into the blessed flames, as a customary decade of the Rosary is prayed while walking clockwise around the bonfire. We prayed the five Joyful Mysteries of the Rosary in Latin, choosing the 2nd decade, dedicated to the Visitation, to circumnavigate the bonfire in honor of Our Lady’s journey to visit her cousin Elizabeth.

It is good to take note of the importance of the Visitation in relation to the celebration of the Birthday of Saint John the Baptist on June 24th. His is one of only three birthdays celebrated on the liturgical calendar of the Church, the others being those of the Blessed Virgin Mary on September 8th, and Our Lord Jesus Christ on December 25th.   There is a reason for only those three: in addition to the certain cases of Jesus and the Virgin Mary, John the Baptist is the only other considered to have been born without the stain of Original Sin. Our Lord, as the only begotten Son of God, of course, was totally sinless. The Sinless Virgin Mary was conceived without the stain of Original Sin, dogmatically defined as Her Immaculate Conception, and thus was without a doubt sinless at birth. With John the Baptist, it is a traditional Catholic belief that he was cleansed of Original Sin before his birth at the time of the Visitation by the unborn Divine Child Jesus as John leapt for joy in his mother’s womb. Thus, it is a commonly held undefined belief since ancient times that although John was conceived with Original Sin, he was born without it.

As with other birthdays, we also celebrated the birthday of Saint John the Baptist. After our prayers, we enjoyed various snacks and fellowship. It is customary to eat strawberries around the blessed bonfire, as the full moon of June is known as the ‘Strawberry Moon” (June 21, 2016). This reddish tinted moon may have received its name from the fact that when it arrives, the strawberry season is at its peak. The red of the moon and of the strawberries during this Month of the Sacred Heart of Jesus also reminds us of the Precious Blood that the Lamb of God, as Saint John the Baptist referred to Jesus, shed to free us from our sins (Jn 1:29, 36). This point was reflected upon as we enjoyed our fresh strawberries.

As the blessed bonfire began to wane, we searched for more fuel for the fire. Someone then recalled that Pope Leo X on June 15, 1520 had issued a Papal Bull entitled Exsurge Domine (Arise O Lord) in which he ordered that the writings of apostate Catholic priest, Martin Luther, “shall be burned publicly and solemnly in the presence of the clerics and people.” Public burnings of Luther’s works then began to take place in Germany, perhaps even in conjunction with the June 2424 bonfires celebrating the Vigil of the Nativity of Saint John the Baptist. 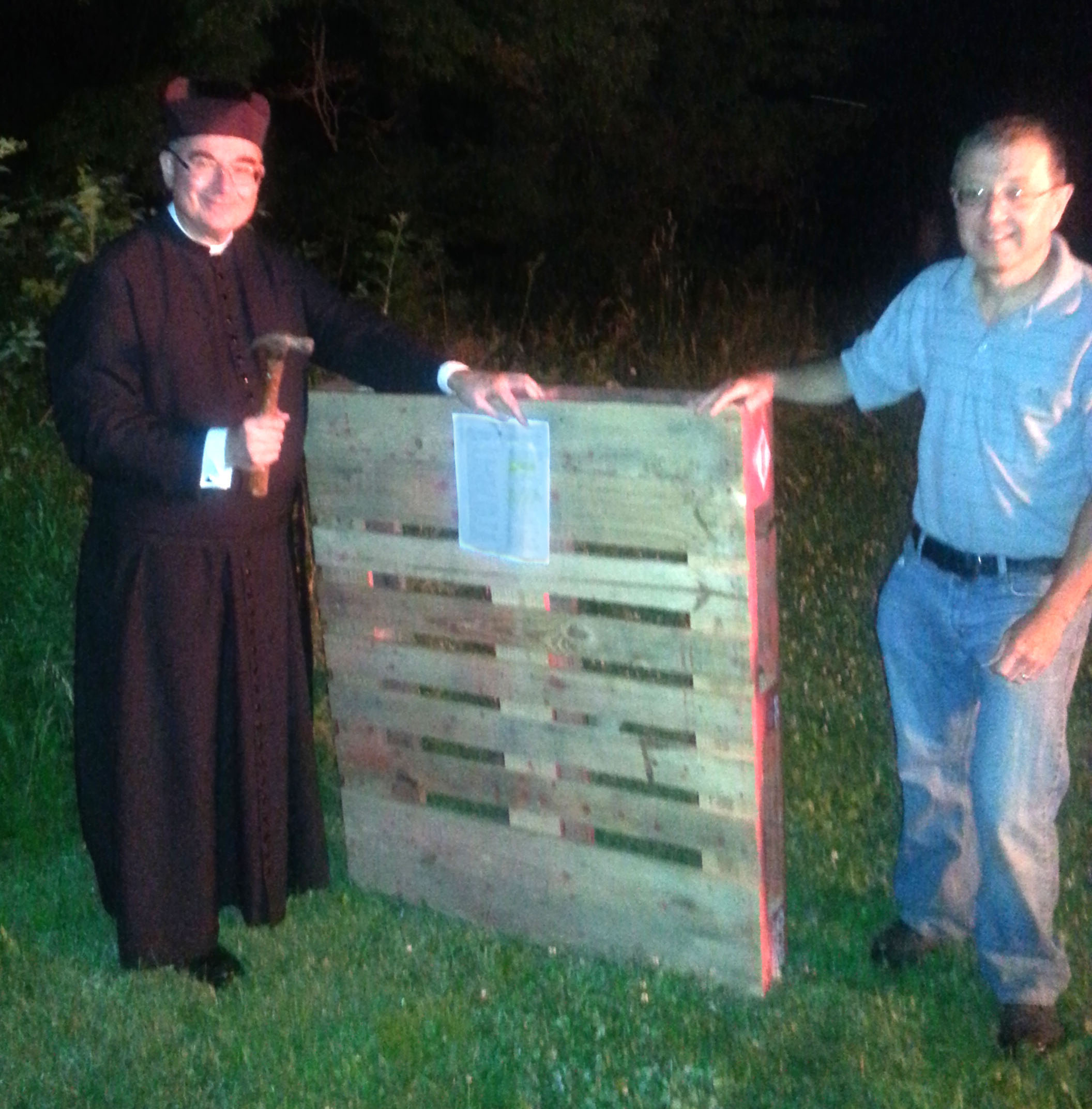 In that spirit, and celebrating our Catholic identity, someone from our group found and nailed a copy of Martin Luther’s ‘95 Theses’ to an old wooden pallet, as Luther had originally nailed them to the door of All Saints Church, Wittenberg, Germany in 1517. The hammer used was affectionately named ‘the Hammer of Heretics.’ In lamentably calling to mind the upcoming 500th Anniversary of Luther’s dastardly deed beginning the Protestant ‘De’-formation of the Church, we then added his impious writings (nailed to the pallet) as fuel to the fire, in accord with the wishes of Pope Leo X.

As we watched the symbol of the beginnings of Protestantism going up in smoke, one of our participants then prepared to light up a special cigar, an “Ave Maria Reconquista.” The Reconquista is that period in Church history which calls to mind the Catholic forces’ retaking of the Iberian Peninsula after numerous battles with the Muslims during some 770 years of infamous Islamic occupation; a reconquest which ended in 1492. May all false religions and ideologies which oppose the One True Church founded by Christ one day “go up in smoke”, so as to fulfill the ‘Great Commission’ of our Lord and God, Jesus Christ, the One True Light of the World: “Going therefore, teach ye all nations, baptizing them in the Name of the Father, and of the Son, and of the Holy Ghost” (Mt 28:19).

As the fires of this world die, like our blessed bonfire and the finest of cigars, may we always be aware of the unholy eternal hellfire that will not be extinguished (Mk 9: 42-47). As such, let us recall the words and actions of Saint John the Baptist and those who followed him: “John was in the desert baptizing, and preaching the baptism of penance, unto remission of sins. And there went out to him all the country of Judea, and all they of Jerusalem, and were baptized by him in the river of Jordan, confessing their sins” (Mk 1: 4-5). In the Traditional Latin Mass, the name of Saint John the Baptist is mentioned twice every time the Confiteor is prayed, as we acknowledge our sinfulness.

The tradition of the blessing of a bonfire on the Vigil of the Birthday of Saint John the Baptist is centuries old. Thanks to the Knights of Columbus Woodlawn Council 2161 Traditional Latin Mass Guild and other dedicated Catholics, that tradition continues. A number of children were brought with their young parents to the bonfire, giving hope of keeping our Catholic traditions and identity alive into the future. And if anyone should ever again try to put an end to our traditional Catholic way of life, be assured that such a move will just serve to add more fuel to the fire.

Obviously,  the Catholic Identity Conference isn't 'just another Catholic conference." These guys are on fire for restoration and  Catholic counterrevolution. Have you signed up yet?

[Comment Guidelines - Click to view]
The Remnant values the comments and input of our visitors. It’s no secret, however, that trolls exist, and trolls can do a lot of damage to a brand. Therefore, our comments are heavily monitored 24/7 by Remnant moderators around the country.  They have been instructed to remove demeaning, hostile, needlessly combative, racist, Christophobic comments, and streams not related to the storyline. Multiple comments from one person under a story are also discouraged. Capitalized sentences or comments will be removed (Internet shouting).
The Remnant comments sections are not designed for frequent personal blogging, on-going debates or theological or other disputes between commenters. Please understand that we pay our writers to defend The Remnant’s editorial positions. We thus acknowledge no moral obligation whatsoever to allow anyone and everyone to try to undermine our editorial policy and create a general nuisance on our website.  Therefore, Remnant moderators reserve the right to edit or remove comments, and comments do not necessarily represent the views of The Remnant.
back to top
Last modified on Friday, August 19, 2016
Tweet
More in this category: « Motherless Prisoners of War Who are the Real Promethean Neo-Pelagians? »