Back in December, Defense Secretary Ash Carter announced that the military would open all combat jobs—from the infantry to special-operations forces—to women. In January 2016, all branches of the military were required to submit their plans to the Defense Department for the gender integration of combat units.  And just like that, America put the world on notice: We've lost our mind, lost our heart, lost our soul.

There she sat, a beautiful little child, peering into the camera with wide, almond eyes; her skin was olive-colored and her hair was a deep brown. Her eyes were tearless, which was surprising considering why this little one was being featured in a nightly news story. Her mommy was going away, you see, for a long time; and no one could tell her when her world would be restored. Blank and empty was the expression she wore on her face; she didn’t understand, she couldn’t understand.

Was her mommy a refugee fleeing war in Syria? No, indeed not. Her mother was an American. In fact, she’s an American hero. She had something really important to do—more important, in fact, than staying home with her four-year-old. You see mommy is a soldier, fighting for the United States Army. It’s off to war for her to save us all from the evil ones and to ‘protect our freedom’.

Mommy began pleading her case just then: “I think the government should pay us more, too, since my unit has been called up. My family needs more money now that I’m off to do my duty.”

Oh, is that why this little urchin looks like death warmed over, because she needs more money?

The camera pans out and the child appears again in the frame. She’s looking away now, but she still won’t cry, almost as if she can’t. She’s beyond that somehow, like a hundred tearful nights have left a void in her soul that makes her numb inside where no more tears are made.

I can’t listen anymore to the vapid chatter about duty, combat and compensation. What about a mother’s sacred duty to nurture and protect her little ones? Not one word.

I focus in on the child. Maybe she can’t cry, but we can cry for her. She looks at a little doll that she’s been sort of carelessly clutching in her arms. All at once, it drops to the floor and she blankly stares down at her fallen plastic pal, while her mother speaks in a tough voice about her life as a soldier.

The little girl makes no move to retrieve the doll; she just stares at it lying there on the floor, right next to her mother’s combat boot.

What has happened to us? All the nobility, the romance, the mystery, the innocence, the joy is being ripped from our lives, and what remains is a cold new reality with no heart, no wonderment, no love—just reversed and disordered and ugly.

Little children say goodbye to mothers wearing flak jackets, fathers 'marry' other fathers and even adopt children; women’s husbands go off to share battleship quarters with female sailors; fathers and mothers divorce and remarry, and divorce and remarry and then divorce again, while children are shuffled from house to house like boxes of blenders and toasters in search of a home.

We shall not know. . .what to cling to, what to love, what to hate. We are oppressed at being men – men with a real individual body and blood. We think it a disgrace and contrive to be some sort of impossible generalized man. We are stillborn, and for generations past have been begotten not by living fathers. Soon we shall contrive to be born from an idea.”

I’d rather lose all the wars and suffer all the consequences than send the mothers of our future into combat. We’ve lost the world war anyway, now that we’re dragging our mothers down into the gutters and the mire and the battlefields from which our fathers shielded them for a thousand years. Yes, I know—this makes me a “sexist pig”. Whatever! At least I know which bathroom to use.

How quickly we’ve grown accustomed to our own barbarism. And no matter who wins the White House in November, will any of this change? Will anyone walk back the things that actually matter to the future of our civilization, or are we cursed to be forever locked away in this egalitarian prison where men think they’re women, women think they’re men, and children don’t know what they are anymore.

Well, most children don’t. Look at this little girl’s face: 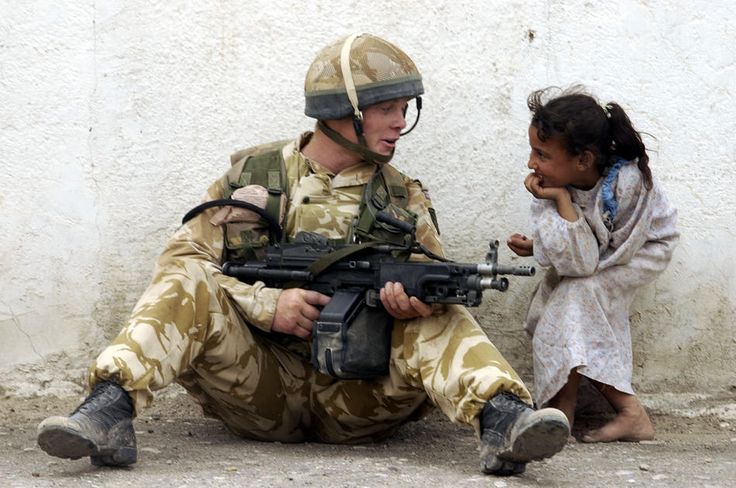 No doubt she’s seen more blood and bombs than any of us can imagine, but quite obviously she’s hasn’t been feminized, she hasn’t been brainwashed.

Despite her dirty little feet and unkempt hair, she’s blithely retained the femininity and innocence so loathed by the would-be masters of our universe. She’s a confident young lady and she knows it, because no “liberated” feminist dolt has poisoned her soul and perverted her mind.

And she’s stolen the heart of the soldier, of course, awakening in him something maybe he’d forgotten was there—something noble, something truly masculine and even chivalrous he’s been trained to ignore as the residual prejudices of a dark time and the benighted people of yesterday.

But the pretty little girl in a war-torn dress effortlessly transforms the "killing machine" back into a human being for a moment, even as war rages all around them both. His smile eclipses even his big, black gun, as everyone involved with this charming yet contradictory moment in time is captivated by the awesome complementarity of the sexes as God created them—a complementarity under nuclear attack everywhere in our brave new world.

To catch Michael's latest, SUBSCRIBE to The Remnant today!

[Comment Guidelines - Click to view]
The Remnant values the comments and input of our visitors. It’s no secret, however, that trolls exist, and trolls can do a lot of damage to a brand. Therefore, our comments are heavily monitored 24/7 by Remnant moderators around the country.  They have been instructed to remove demeaning, hostile, needlessly combative, racist, Christophobic comments, and streams not related to the storyline. Multiple comments from one person under a story are also discouraged. Capitalized sentences or comments will be removed (Internet shouting).
The Remnant comments sections are not designed for frequent personal blogging, on-going debates or theological or other disputes between commenters. Please understand that we pay our writers to defend The Remnant’s editorial positions. We thus acknowledge no moral obligation whatsoever to allow anyone and everyone to try to undermine our editorial policy and create a general nuisance on our website.  Therefore, Remnant moderators reserve the right to edit or remove comments, and comments do not necessarily represent the views of The Remnant.
back to top
Last modified on Wednesday, August 17, 2016
Tweet

More in this category: « The Assumption of the Blessed Virgin Mary, and a little known privilege she received Catholic Identity Conference Organizers Burn Works of Martin Luther, Celebrate St. John the Baptist »