Written by  The White Rose
Rate this item
(36 votes) 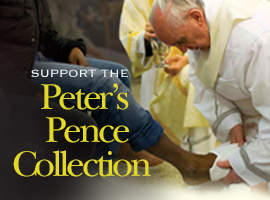 Last weekend at many of the parish masses, the announcement was made from the pulpit and in the bulletin that this weekend’s second collection was for Peter’s Pence. As most Catholics understand, Peter’s Pence is the charitable fund for the Holy Father to dispense to his favorite charities. The USCCB provided sample bishop letters on its website for the solicitation. The Bishop’s Letter read as follows:

“Through the Peter’s Pence Collection, we stand in solidarity with Catholics all over the world to support the charitable works of our Holy Father. Contributions to this collection support Pope Francis as he reaches out to those suffering the effects of war and violence, natural disasters, and religious persecution.”

For the last 3 years, many Catholics have watched in horror the issues that Pope Francis promotes and supports with Vatican resources. We know the causes near and dear to his heart, i.e., climate change, migration of Muslims, reform of prisons, UN sustainable development goals, to name just a few.

Shockingly, the ISIS-led persecutions of Catholics and Christians in the Middle East has not captured his imagination or heart. Barely a papal peep about Christian genocide from the loquacious Vicar of Christ. Understandably, Francis wouldn’t want to damage the ecumenical rapport with his Islamic Imams by condemning the beheading of innocent Christians by Muslims.

Don’t hold your breath for Peter’s Pence dollars to be spent on Christian religious persecutions.

Francis remains eerily silent over the widespread persecution of Catholics in China and the monumental genocide of forced abortions. To criticize the forced abortions of millions and the appointment of Chinese government mandated catholic bishops, would interfere with his ongoing political detente with China.

As for migration, Catholics take note of the papal sojourn and photo op in Lesbos to demonstrate support for migration and refugees. The Pope generously brought back 3 refugee families to Rome on the papal plane. Shockingly, all were Muslims. Francis left the Christian refugees behind in Lesbos stunned by his snub.

As for his nearest and dearest cause, climate change, the Pope has embraced and spearheaded global warming alarmism with endless conferences, UN addresses, polished expensive videos, laser shows on the facade of St. Peter’s and an apostolic exhortation. Lending his voice, resources and financial support to the UN one world global order will ensure massive redistribution of the West’s wealth and pauperize the middle class.

Will Peter’s Pence dollars be spent on promotional videos to promote the UN eco agenda?

Demand Release of the 300-Page Dossier

Finally, Catholics who generously toss their hard earned wages into the collection basket, deserve to know exactly how the Vatican spends our money.

We are still waiting for the release of the 300-page dossier papal investigation, sitting in a vault, gathering dust in the Apostolic Palace.

Commissioned by Benedict and completed in December 2012, the dossier details massive financial mismanagement and scores of other nefarious clerical behavior. Apparently, the lengthy investigation uncovered widespread financial mismanagement, fraud, blackmail, and other hideous abuses of the laity’s hard earned donations.

Media reports speculate that the Dossier exposes the pervasive corruption of the lavender gay lobby at the Vatican. Rest assured, where there is financial fraud, there is often sexual clerical misconduct. Reportedly, the Dossier’s content shocked Pope Benedict into retirement.

So, until the unredacted “300-page Dossier” is released in full, and in English, pass up the Peter’s Pence collection basket. Send the only message that the Vatican and Bishops understand: the laity’s money is our precious hard earned money and we won’t squander it on papal boondoggles.

Instead, send a generous check to the nuns, they will use it wisely and charitably:

[Comment Guidelines - Click to view]
The Remnant values the comments and input of our visitors. It’s no secret, however, that trolls exist, and trolls can do a lot of damage to a brand. Therefore, our comments are heavily monitored 24/7 by Remnant moderators around the country.  They have been instructed to remove demeaning, hostile, needlessly combative, racist, Christophobic comments, and streams not related to the storyline. Multiple comments from one person under a story are also discouraged. Capitalized sentences or comments will be removed (Internet shouting).
The Remnant comments sections are not designed for frequent personal blogging, on-going debates or theological or other disputes between commenters. Please understand that we pay our writers to defend The Remnant’s editorial positions. We thus acknowledge no moral obligation whatsoever to allow anyone and everyone to try to undermine our editorial policy and create a general nuisance on our website.  Therefore, Remnant moderators reserve the right to edit or remove comments, and comments do not necessarily represent the views of The Remnant.
back to top
Last modified on Wednesday, June 22, 2016
Tweet
More in this category: « Modernism 101: Is the Novus Ordo an Unworthy Sacrifice to God? New World Order Suffers Huge Setback in UK »