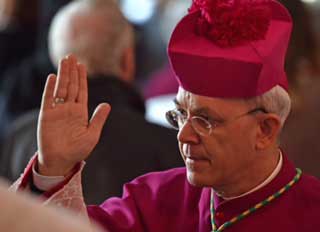 Dear Mr. Matt:
Thank you for your greetings. I wrote an answer to The Remnant‘s Open Letter, which I send to you in the attachment and you can publish. God bless abundantly you and your apostolate for the Catholic faith. With cordial greetings in Jesus and Mary,


Dear Mr. Christopher A. Ferrara:
On May 9, 2016 you published on “The Remnant” website an open letter to me regarding the question of the Apostolic Exhortation “Amoris laetitia”.

As a bishop, I am grateful and at the same time encouraged to receive from a Catholic layman such a clear and beautiful manifestation of the “sensus fidei” regarding the Divine truth on marriage and the moral law.

I am agreeing with your observations as to those expressions in AL (“Amoris laetitia”), and especially in its VIII’s chapter, which are highly ambiguous and misleading. In using our reason and in respecting the proper sense of the words, one can hardly interpret some expressions in AL according to the holy immutable Tradition of the Church.

In AL, there are of course expressions which are obviously in conformity with the Tradition. But that is not what is at issue here. What is at stake are the natural and logical consequences of the ambiguous expressions of AL. Indeed, they contain a real spiritual danger, which will cause doctrinal confusion, a fast and easy spreading of heterodox doctrines concerning marriage and moral law, and also the adoption and consolidation of the praxis of admitting divorced and remarried to Holy Communion, a praxis which will trivialize and profane, as to say, at one blow three sacraments: the sacrament of Marriage, of Penance, and of the Most Holy Eucharist.

In these our dark times, in which Our Beloved Lord seems to sleep in the boat of His Holy Church, all Catholics, beginning from the bishops up to the simplest faithful, who still take seriously their baptismal vows, should with one voice (“una voce”) make a profession of fidelity, enunciating concretely and clearly all those Catholic truths, which are in some expressions of AL undermined or ambiguously disfigured. It would be a kind of a “Credo” of the people of God. AL is clearly a pastoral document (i.e., by its nature of temporal character) and has no claims to be definitive. We have to avoid to “make infallible” every word and gesture of a current Pope. This is contrary to the teaching of Jesus and of the whole Tradition of the Church. Such a totalitarian understanding and application of Papal infallibility is not Catholic, is ultimately worldly, like in a dictatorship; it is against the spirit of the Gospel and of the Fathers of the Church.

Beside the above mentioned possible common profession of fidelity, there should be made to my opinion, by competent scholars of dogmatic and moral theology also a solid analysis of all ambiguous and objectively erroneous expressions in AL. Such a scientific analysis should be made without anger and partiality (“sine ira et studio”) and out of filial deference to the Vicar of Christ.

I am convinced that in later times the Popes will be grateful that there had been concerning voices of some bishops, theologians and laypeople in times of a great confusion. Let us live for the sake of the truth and of the eternity, “pro veritate et aeternitate”!

Auxiliary Bishop of the Archdiocese of Saint Mary in Astana ■

This letter appeared in the May 31, 2016 print/E-edition of The Remnant. To see what else you missed, subscribe today.

[Comment Guidelines - Click to view]
The Remnant values the comments and input of our visitors. It’s no secret, however, that trolls exist, and trolls can do a lot of damage to a brand. Therefore, our comments are heavily monitored 24/7 by Remnant moderators around the country.  They have been instructed to remove demeaning, hostile, needlessly combative, racist, Christophobic comments, and streams not related to the storyline. Multiple comments from one person under a story are also discouraged. Capitalized sentences or comments will be removed (Internet shouting).
The Remnant comments sections are not designed for frequent personal blogging, on-going debates or theological or other disputes between commenters. Please understand that we pay our writers to defend The Remnant’s editorial positions. We thus acknowledge no moral obligation whatsoever to allow anyone and everyone to try to undermine our editorial policy and create a general nuisance on our website.  Therefore, Remnant moderators reserve the right to edit or remove comments, and comments do not necessarily represent the views of The Remnant.
back to top
Last modified on Thursday, June 2, 2016
Tweet
More in this category: « Recalling Why They Resisted: Dr. John Senior's Classic 'The Glass Confessional' On Using the “H” Word (it all depends on what this 'this' is) »