Cardinal Dolan on Apostolic Exhortation: “Under the guidance of the Holy Spirit the Church is trying to be faithful" Featured

Written by  Christopher A. Ferrara
Rate this item
(50 votes) 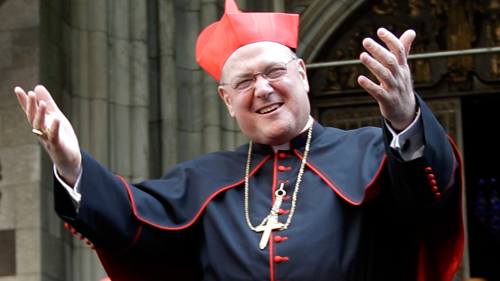 The “Joy of Love” is about to explode upon the Catholic world, no doubt overthrowing the teaching of both John Paul II and Benedict XVI, in line with all of Tradition, on the impossibility of  Holy Communion for those living in a state of continual adultery. The overthrow will be veiled in ambiguous references to the “internal forum,” “integration,” and a “path or journey” culminating in admission to Holy Communion according to the “competence” of the local ordinary or the “episcopal conferences” Paul VI invented to begin the process of fragmenting the universal discipline of the Church Universal in the context of the “liturgical reform.”

In short, if what seems likely comes to pass, practice will hollow out the dogma on the indissolubility of marriage, making a mockery of the very words of Our Lord Himself, which “The Joy of Love” will of course affirm resoundingly with paragraph after paragraph of empty praise.
The neo-Catholic establishment will immediately capitulate to the latest novelty, as it has done with all the others in the post-conciliar regime of novelty, and will then reliably denounce traditionalist opposition to the change, which will mirror the decomposition of the mainline Protestant churches.

Leading the way to another ruinous compromise of the Church’s integrity will be neo-Catholic prelates like Cardinal Timothy (“bravo” for homosexuals) Dolan. Dolan will tell us this is nothing to get excited about.  In fact, he is telling us that already, even before he has seen the document.

[Correction] Invoking the always reliable “Holy Spirit” as the unimpeachable source of the latest catastrophic blunder, Dolan assures us that "the Church under the guidance of the Holy Spirit is sincerely trying to be faithful to the timeless teaching of Jesus, and yet apply that in a very merciful, understanding, gracious way.” So let us wish the Church the best of luck on Friday, shall we?

Then again, when asked pointedly about whether there will be “a cautious opening to Communion for the divorced and remarried,” Dolan replied:

I haven’t spent much time on that. For one, I don’t think that’s going to happen. For two, this in many ways already has happened.

Of course, there’s a conservative approach to the internal forum solution that the most conservative canonists and theologians have defended forever. I think the fear among many of us, however, is that if anything, things have become a little bit too lax.

If the pope now says, ‘Let’s go back to that traditional openness of the Church, that some things can be settled on the level of conscience’, that’s nothing new. It goes back to the arguments of Alphonsus de Liguori, and everybody else. If he says, ‘Let’s add to that in a very reasoned, prayerful, reflective way,’ that, to me, would hardly be revolutionary.

As for us traditionalists, we can only do what we have always done in the face of the post-conciliar madness: resist and hold fast to what has been handed down.  As Father John Hunwicke has written concerning the probable debacle on Friday:

So might the Holy Father try to cut  the Gordian Knot about Holy Communion for remarried divorcees by kicking the ball into the long grass of Episcopal Conferences?…

We, in the Church of England, saw what happened when 'Provincial Autonomy' was allowed to ride rough-shod over Doctrine, Tradition, Bible ... and even the Dominical Imperative of Unity. It is a thoroughly nasty and miserable experience.

As a former Anglican, I warn you: decades of internal warfare within the Church on this subject are exactly what the Church Militant can do without. For most of my priestly ministry in the Church of England, this question hung like a dark shadow over my head. Any attempt by anybody [emphasis in original] to inflict a similar wound upon the Catholic Church merits, as Cardinal Burke has intimated, Resistance in whatever forms may be necessary, and with as much vigour as God's Grace gives us….

It raises the ultimate question of whether Christ is King, or whether each nation bows down before the idol of its own national Zeitgeist.

Those are the words of a true son of the Church Militant.

[Comment Guidelines - Click to view]
The Remnant values the comments and input of our visitors. It’s no secret, however, that trolls exist, and trolls can do a lot of damage to a brand. Therefore, our comments are heavily monitored 24/7 by Remnant moderators around the country.  They have been instructed to remove demeaning, hostile, needlessly combative, racist, Christophobic comments, and streams not related to the storyline. Multiple comments from one person under a story are also discouraged. Capitalized sentences or comments will be removed (Internet shouting).
The Remnant comments sections are not designed for frequent personal blogging, on-going debates or theological or other disputes between commenters. Please understand that we pay our writers to defend The Remnant’s editorial positions. We thus acknowledge no moral obligation whatsoever to allow anyone and everyone to try to undermine our editorial policy and create a general nuisance on our website.  Therefore, Remnant moderators reserve the right to edit or remove comments, and comments do not necessarily represent the views of The Remnant.
back to top
Last modified on Monday, April 4, 2016
Tweet

More in this category: « The Martyrdom of the Body of Christ Archbishop Lefebvre Was Wrong All Along! Right? »