Traditional Latin Mass 101: Getting EVERYTHING Out of the Mass Featured 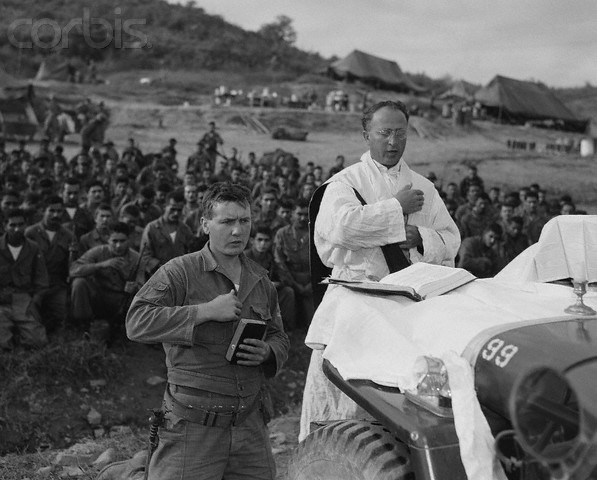 Thought of the Day: All practicing Roman Catholic soldiers in WWII were "traditional Catholics" who attended the  Latin Mass exclusively. So what happened?

One of the distressing complaints so often heard from those who attend the Novus Ordo Liturgy is: “I didn’t get anything out of that Mass.” Such persons should be reminded that Catholics traditionally did not come to Mass to be entertained; rather then, as now, the main focus for attending Mass is to worship Almighty God.

The Commemoration of the Living is considered to be a continuation of where the “Te igitur” left off; which offers up Sacrifices to Almighty God in the first place for the Holy Catholic Church, and then also for the Pope, our Bishop and “for all orthodox believers and all who profess the Catholic and Apostolic Faith” (“…et omnibus orthodoxis, atque catholicae et apostolicae fidei cultoribus”).

Graces are thus heaped upon the Church Militant, in so far as they hold and profess the One, Holy, Catholic and Apostolic Faith.   To the degree that one deviates or dissents from the One True Faith founded by Christ, that is the extent to which one “will not get anything” out of the Mass. To the extent that the Mass is recognized as a Holy Sacrifice offered to Almighty God, as opposed to a mere man/community-centered memorial meal, that is the magnitude to which graces will be received for the Church, the Pope, our Bishop, and ourselves.

“Memento, Domine, famulorum famularumque tuarum N…et N…” (Be mindful O Lord of Thy servants and handmaids N… and N…)     The Commemoration of the Living begins with the word Memento (Remember/Be mindful). The letters N. and N. are the place where the sacrificing Priest secretly and specifically calls to mind living persons for whom he will silently pray, with folded hands, to receive special graces. These special intentions of the Priest are made in addition to, and without prejudice to, the principal intention of the Mass. When a Priest says that he will remember you in his Mass, the Memento for the Living is that special place where the merits of the Cross will abound for you. In his classic work, The Holy Sacrifice of the Mass, Rev. Dr. Nicholas Gihr writes:

Since the prayer of the Church, especially in connection with the sacrifice, is exceedingly powerful and efficacious, the zealous Priest will not omit to render it profitable especially to all those to whom he is most closely bound, and to whom he is under obligations of justice, charity or gratitude.

“…et omnium circumstantium, quorum tibi fides cognita est, et nota devotio…” (…and of all here present, whose faith and devotion are known to Thee…)   At this point, a special invocation is made for all those who are present at the Mass. For this reason, it is desirable to attend Mass every day, not just on Sundays and Holy Days. For those unable to physically attend the Holy Sacrifice, such as the sick and shut-ins, they can spiritually unite themselves to the Mass and receive these special graces. To the level that the attendee’s faith and devotion are intense, sincere, pure and undefiled, that will be the measure by which they will receive Divine graces and blessings from the Holy Sacrifice of the Mass.

“…pro quibus tibi offerimus: vel qui tibi offerunt hoc sacrificium laudis, pro se, suisque omnibus…” (…for whom we offer, or who offer up to Thee this Sacrifice of praise for themselves and all those dear to them...)   This prayer indicates that attendance at Mass benefits not only the congregation, but those for whom they pray. From the pew, the attendee at Mass may procure tremendous graces and blessings from the Holy Sacrifice for family, friends and other persons, in addition to themselves. So to the point that the faithful offer up to God, in union with the Priest, the Holy Sacrifice for themselves and others, such will be the end to which the Holy Mass will be efficacious for them.

“…pro redemptione animarum suarum…” (...for the redemption of their souls…) The needs of the soul take precedence over bodily needs. We are reminded here that the Holy Sacrifice of the Mass is a help for us to avoid the loss of Heaven and the pains of hell. The Redeeming Blood of Christ is poured out upon those prayed for in the Holy Sacrifice of the Mass. For the apostate who believes that everyone goes to Heaven and that no one goes to hell, they will not “get anything” out of these words from the Holy Sacrifice. To the proportion that one believes in the four last things (death, judgment, Heaven, and hell), that is the scope to which one will “get anything” of the supernatural consolation that this prayer offers.

“…pro spe salutis et incolumitatis suae...” (…and the hope of their safety and salvation…) The bodily needs of those prayed for are not neglected, but are connected with the ultimate goal of eternal salvation. Here, Gihr notes:

The word ‘salvation’ (salus) here comprises all spiritual supernatural gifts: grace in time and eternity; the word safety (incolumitas) designates not merely health of body, but generally success and happiness in temporal things, in the goods (immaterial and material) belonging to the natural order. They too may be obtained by sacrifice and prayer, in so far as they serve for the attainment of eternal happiness.

"…tibique reddunt vota sua aeterno Deo, vivo et vero.” (…who now pay their vows to Thee, the everlasting, living and true God.) We renew here the vows of our Baptism; where we reject satan, and all his works, and all his allurements. Gihr adds:

These holy vows we pay at the Holy Sacrifice of the Mass, inasmuch as we offer not only the Eucharistic Victim, but in union with it we offer ourselves also, our body and our soul, our prayers and our homage, our labors and trials, our sufferings and our joys, as gifts due to the Lord.

In light of these vows, it is important to note that the official prayers of the Mass cannot include prayers for those outside the Holy Catholic Church. In ancient times, the names to be specifically said for the Commemoration of the Living were inscribed on a two-leaved tablet called a diptych. However, if a person lost the Faith or fell into heresy, his name was removed from the diptych. Although the diptych of the living is no longer used, Dom Prosper Gueranger explains in his book, The Holy Mass, that the principle remains the same:

The Priest cannot here pray either for Jews or for infidels, no more than he can for heretics, who by the very fact of heresy alone, are excommunicates, and consequently out of the pale of the Holy Catholic Church. Neither can he pray for such as, without being heretics, are excommunicated for other causes; it would be a profanation to utter the names of any such in the midst of the Holy Sacrifice. They may be prayed for in private, but not in official prayers. They are excluded from the Sacrifice, as they are out of the Church; consequently, it is impossible to mention them during the Sacred Celebration.

The Memento for the Living of the Traditional Latin Mass does provide a good rebuke for the impious person who dares to say: “I did not get anything out of that Mass.” However, the ultimate answer that should drop the scales from their eyes is to refer to the reception of the Body, Blood, Soul and Divinity of Our Lord and God, Jesus Christ, at Holy Communion. You cannot “get”/receive anything greater than that. If that was all that one “got out of Mass,” that would be beyond all earthly gifts.

However, if the complaining person who received Holy Communion was not in a state of grace or did not possess the Catholic Faith in the Eucharist, then they would indeed have been left with that empty feeling – a feeling that comes from committing sacrilege. Saint Paul writes: “Therefore whosoever shall eat this Bread, or drink the Chalice of the Lord unworthily, shall be guilty of the Body and of the Blood of the Lord” (1 Cor 11:27). Then, at judgment day, what the impious will ultimately “get” for unworthily receiving the Body and Blood of our Lord will be worse that “anything” in this life. What we “get” out of Mass depends in large part upon what we put into it.

Father Cizik's "Latin Mass 101" column is a regular feature in the print edition of The Remnant. Subscribe today!

[Comment Guidelines - Click to view]
The Remnant values the comments and input of our visitors. It’s no secret, however, that trolls exist, and trolls can do a lot of damage to a brand. Therefore, our comments are heavily monitored 24/7 by Remnant moderators around the country.  They have been instructed to remove demeaning, hostile, needlessly combative, racist, Christophobic comments, and streams not related to the storyline. Multiple comments from one person under a story are also discouraged. Capitalized sentences or comments will be removed (Internet shouting).
The Remnant comments sections are not designed for frequent personal blogging, on-going debates or theological or other disputes between commenters. Please understand that we pay our writers to defend The Remnant’s editorial positions. We thus acknowledge no moral obligation whatsoever to allow anyone and everyone to try to undermine our editorial policy and create a general nuisance on our website.  Therefore, Remnant moderators reserve the right to edit or remove comments, and comments do not necessarily represent the views of The Remnant.
back to top
Last modified on Wednesday, December 16, 2015
Tweet
More in this category: « Building A Catholic Alliance: An Urgent Appeal from Michael J. Matt New From Remnant TV...Vatican Scandals »