A Letter from Bishop Mercy to the Apostle Paul 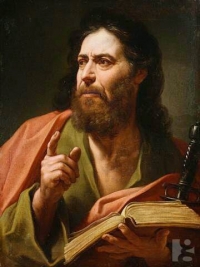 St. Paul resisted St. Peter to his face because he undermined the truth of the Gospel

Bishop Mercy of Laodicea to the Apostle Paul. Grace and peace to you.

I was recently sent a copy of your first letter to the Corinthians and I have a few matters I would like to address with you.

I marvel at your conception of God when you say:

“Don’t you know that you yourselves are God’s temple and that God’s Spirit dwells in your midst? If anyone destroys God’s temple, God will destroy that person; for God’s temple is sacred, and you together are that temple. ” (1 Cor. 3:16-17)

Beloved Apostle of God, do you not know that God is a God of love and not wrath? He simply is too merciful to “destroy” a person. You would do well to learn that God loves his children so much that he does not condemn them.

I am even more disturbed by the threats you leveled against the Corinthians, saying:

“Some of you have become arrogant, as if I were not coming to you. But I will come to you very soon, if the Lord is willing, and then I will find out not only how these arrogant people are talking, but what power they have. For the kingdom of God is not a matter of talk but of power. What do you prefer? Shall I come to you with a rod of discipline, or shall I come in love and with a gentle spirit?” (1 Cor. 4:18-21)

Oh dear apostle, don’t you know that we must not use such harsh language, but must accompany such individuals on their “faith journey”?

Much more alarming was your uncharitable suggestion that a Corinthian man guilty of what you consider to be “sexual immorality” should be excommunicated. You say:

“It is actually reported that there is sexual immorality among you, and of a kind that even pagans do not tolerate: A man is sleeping with his father’s wife. And you are proud! Shouldn’t you rather have gone into mourning and have put out of your fellowship the man who has been doing this?...hand this man over to Satan for the destruction of the flesh,so that his spirit may be saved on the day of the Lord.” (1 Cor. 5:1-5)

How dare you have such a judgmental attitude of this man? You haven’t even met him and yet you judge him. We ought not to excommunicate such people and you would do better not to “sit in the chair of Moses and judge…with superiority and superficiality, difficult cases and wounded families.” Rather than hurl dead stones at such people, “we need to get to know what their life is like if we're going to accompany them.”

You further display a hateful attitude towards those Christians who do not meet your standards of perfection, saying:

“I wrote to you in my letter not to associate with sexually immoral people—not at all meaning the people of this world who are immoral, or the greedy and swindlers, or idolaters. In that case you would have to leave this world. But now I am writing to you that you must not associate with anyone who claims to be a brother or sisterbut is sexually immoral or greedy, an idolater or slanderer, a drunkard or swindler. Do not even eat with such people.” (1 Cor. 5:9-11)

Rather than arrogantly shun such people, you ought to “accompany those people who have had this failure in their love. Do not condemn. Walk with them – and don’t practice casuistry on their situation”. Such an approach is too exclusionary and “I think we have to make sure that we don't pigeonhole one group as though they're not part of the human family”, contrary to what you are clearly doing here.

You not only assume that you may judge others, but even suggested that other Christians may judge the “sexually immoral” (as you demonize such people), by saying:

But don’t you know the Lord said “judge not lest ye be judged”? We ought not to “hand down condemnations or anathemas but to proclaim God’s mercy” to such people.

I was most disturbed, and even personally offended, by your hateful statement that practicing homosexuals do not go to heaven, when you said:

In Laodicea “I visit regularly with people who feel marginalized, whether they're elderly or the divorced and remarried, gay and lesbian individuals, also couples…We need to get to know what their life is like if we're going to accompany them.” We know that “the Christian ethic is based on lasting relationships where exclusivity, loyalty, and care are central to each other” so as long as the homosexual relationship is stable, then we should “acknowledge the actual quality of gay and lesbian couples; and such a form of shared-life should meet the same criteria as found in an ecclesiastical marriage”.

It was quite hard to believe you asserted that a divorcee whose former spouse is still alive may not marry:

“To the married I give this command (not I, but the Lord): A wife must not separate from her husband. But if she does, she must remain unmarried or else be reconciled to her husband. And a husband must not divorce his wife.” (1 Cor. 7:10-11)

Here you show yourself to be an example of those “closed hearts which frequently hide even behind the Church’s teachings or good intentions, in order to sit in the chair of Moses and judge, sometimes with superiority and superficiality, difficult cases and wounded families.”

I was also disturbed by your rigidity when it comes to the Eucharist, as you actually suggested some may be judge by God for eating it in an “unworthy manner”:

“So then, whoever eats the bread or drinks the cup of the Lord in an unworthy manner will be guilty of sinning against the body and blood of the Lord. Everyone ought to examine themselves before they eat of the bread and drink from the cup.For those who eat and drink without discerning the body of Christ eat and drink judgment on themselves.” (1 Cor. 11:27-29)

As I said earlier, “God loves his children so much that he does not condemn them”, likewise he would never be so unmerciful as to say someone may drink “judgement on themselves”. Your rigidity concerning who may or may not receive the Eucharist is pharisaical, as it is more concerned with observing rules or customs than love for neighbor.

I have a few other bones to pick with you but that will have to wait for another time. For now, I wish that you will consider how judgmental, arrogant, Pharisaical and hateful you have been in your writings.

Peace be with you.

[Comment Guidelines - Click to view]
The Remnant values the comments and input of our visitors. It’s no secret, however, that trolls exist, and trolls can do a lot of damage to a brand. Therefore, our comments are heavily monitored 24/7 by Remnant moderators around the country.  They have been instructed to remove demeaning, hostile, needlessly combative, racist, Christophobic comments, and streams not related to the storyline. Multiple comments from one person under a story are also discouraged. Capitalized sentences or comments will be removed (Internet shouting).
The Remnant comments sections are not designed for frequent personal blogging, on-going debates or theological or other disputes between commenters. Please understand that we pay our writers to defend The Remnant’s editorial positions. We thus acknowledge no moral obligation whatsoever to allow anyone and everyone to try to undermine our editorial policy and create a general nuisance on our website.  Therefore, Remnant moderators reserve the right to edit or remove comments, and comments do not necessarily represent the views of The Remnant.
Last modified on Monday, November 9, 2015