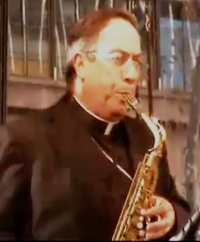 Revolution, si. True reform and restoration, no. Concerning the curial “gay mafia” the Pope originally suggested he would confront, Francis dismissed its existence during his trip to Brazil with his famous joke about not having seen any gay mafia membership cards. And what about the financial scandals at the Vatican bank? The Pope has placed in charge of IOR none other than his personal friend Monsignor Battista Ricca, whose flagrant homosexual activities while attached to the Vatican diplomatic service in Uruguay were documented by Sandro Magister based on multiple sources. Those sources reported, among other incidents, Ricca’s homosexual affair with one Patrick Haari, which “was so open as to scandalize numerous bishops, priests, and laity of that little South American country, not last the sisters who attended to the nunciature.”  Relying solely on the Vatican’s evidently sanitized personnel file, however, Francis declared: “we have found no evidence against Mgr. Ricca.”

So, the Pope has “reformed” IOR by placing it in charge of a member of the same gay mafia whose existence he denies. In fact, it was in response to a question about this mafia that the Pope uttered his shot heard round the world:

Agh… so much is written about the gay lobby.  I have yet to find on a Vatican identity card the word gay.  They say there are some gay people here. I think that when we encounter a gay person, we must make the distinction between the fact of a person being gay and the fact of a lobby, because lobbies are not good.  They are bad.  If a person is gay and seeks the Lord and has good will, who am I to judge that person?

As for the reform of the Vatican bureaucracy at large, Francis has called in several prominently “pro-gay” international consulting firms, including Ernst & Young, at the cost of tens of millions of dollars. This move has already resulted in a “

. I will confine myself to one of the Cardinal’s statements concerning Vatican II, which typifies how the Modernist relies on a deceptive misuse of sources to support his theological novelties.

According to the Cardinal, concerning the “people of God” the conciliar document Lumen Gentium teaches that “within the people, there is not a dual classification of Christians–laity and clergy, essentially different. The Church as a ‘society of unequals’ disappears.” To support this outlandish claim the Cardinal crops a phrase from LG 32: “There is, therefore, in Christ and in the Church no inequality (LG 32)”. Notice the lack of ellipses, which conceals the rest of the sentence, which I quote in full as shown by the italics:

That is, what the Council really teaches is that there is no distinction within the Mystical Body based on race, ethnicity, sex or social standing. But the Council also teaches in the same document what Rodríguez Maradiaga clearly wishes to hide: that there is a distinction in both essence and degree between the priesthood and the hierarchy on the one hand and the laity on the other:

Though they differ from one another in essence and not only in degree, the common priesthood of the faithful and the ministerial or hierarchical priesthood are nonetheless interrelated: each of them in its own special way is a participation in the one priesthood of Christ. (LG 10)

The ministerial priest, by the sacred power he enjoys, teaches and rules the priestly people; acting in the person of Christ, he makes present the Eucharistic sacrifice, and offers it to God in the name of all the people. (LG 10)

Granted, the Council’s phrase “common priesthood of the faithful” is one of the many vexing ambiguities that plague the conciliar documents. Read in context, however, the Council’s teaching is exactly the opposite of what Rodríguez Maradiaga represents: the Church as a “society of unequals” does not “disappear,” but on the contrary is affirmed by the Council’s recognition that the priesthood and the hierarchy differ in both degree and essence from the laity and are divinely endowed with the power to rule and govern the faithful.

In short, the Cardinal deceives us. But then, the “renewal of Vatican II” as a whole is one massive deception whose perpetrators intend to persevere in that deception until they have finally abolished every last one of what the sax player from Honduras audaciously belittles, in the same address, as “many customs, laws and structures that did not respond to the teachings or the practice of Jesus.” Indeed, the post-conciliar neo-Modernist assault on the traditions of the Faith no longer has anything to do with the literal teaching of Vatican II, except to the extent that the Council’s ambiguities provide what its ruthlessly radical partisans construe as a mandate for the final destruction of the “pre-Vatican II Church.”

This is the man Pope Francis has placed in charge of his Council of Cardinals, created to “reform” the Church—yet again—along the same lines that have already devastated the ecclesial commonwealth. May Our Lady deliver her Church at long last from the clutches of these innovators, and from the “spirit” of a Council it seems only a divine exorcism will be able to expel from our midst.

Published in Remnant Articles
back to top
Last modified on Wednesday, January 29, 2014
Tweet

More in this category: « A Warning about Purgatory and the Next Life Life or Death in the Brave New World »