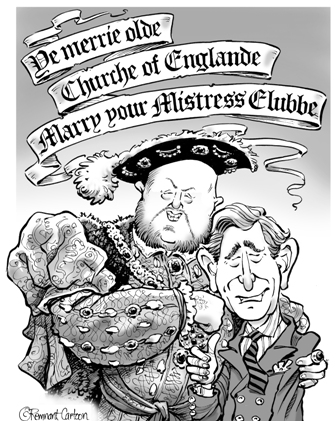 Early reports are in, and it looks like Pope Francis, as expected, has radically reformed the process by which Catholics may annul their marriages, streamlining steps that many liberals in the church considered too cumbersome.

The move is the latest in a series of public relations initiatives, whereby Francis hopes to make his pontificate appear more responsive to the needs of lay Catholics, especially those who have "long felt marginalized" by the hierarchy (READ: Don't like Catholic moral theology).

The three main changes announced on Tuesday are:

• Eliminating a second review by a cleric before a marriage can be nullified.

• Giving bishops the ability to fast-track and grant the annulments themselves in certain circumstances -- for example, when spousal abuse or an extramarital affair has occurred.

• The process should be free, except for a nominal fee for administrative costs, and should be completed within 45 days.

The Pope's reforms came Tuesday in the form of two "motu proprio" documents, Latin for "by (the Pope's) own initiative." They become part of Catholic canon law on December 8, the beginning of Francis' declared "Year of Mercy."


REMNANT COMMENT: We'll have to wait for the official translation later today, but this already promises to dramatically undermine marriage, especially in third world countries where the annulment process is less popular and marriage vows are stronger.

The Pope is reportedly waiving fees, leaving it up to local bishops to delegate priests to handle annulments, removing one of the tribunals, removing the automatic appeal, and green-lighting annulments when both parties want the annulment. (This last one is my favorite, by the way, since it basically means that when you and the missus decide to call it quits all you need is mutual agreement that the thing never happened in the first place. Now . isn't . that . convenient!)

And of course the Holy Father is adding a “lack of faith” to the growing list of trumped-up reasons to conclude there was never a marriage in the first place, as well. At the end of the day, if you WANT an annulment you GOT an annulment . . . but let’s not call it “divorce”. Heck, no! That would tamper with the indissolubility of marriage!

By the way, what about those of us who feel marginalized for believing as Catholics believed for thousands of years, that marriage vows actually mean something, that only death can break them, that we are married in the eyes of God, that there is no opt-out clause?  What about us?

What about those who follow the rules and take marriage seriously, and who firmly believe that "streamlining the annulment process" is just an embarrassingly transparent euphemism for on-demand divorce for Catholics?  Any chance of us getting a little mercy up in here? No? I didn’t think so!

What a joke! How the halls of hell must be echoing with the booming laughter of old Henry the King of England.

[Comment Guidelines - Click to view]
The Remnant values the comments and input of our visitors. It’s no secret, however, that trolls exist, and trolls can do a lot of damage to a brand. Therefore, our comments are heavily monitored 24/7 by Remnant moderators around the country.  They have been instructed to remove demeaning, hostile, needlessly combative, racist, Christophobic comments, and streams not related to the storyline. Multiple comments from one person under a story are also discouraged. Capitalized sentences or comments will be removed (Internet shouting).
The Remnant comments sections are not designed for frequent personal blogging, on-going debates or theological or other disputes between commenters. Please understand that we pay our writers to defend The Remnant’s editorial positions. We thus acknowledge no moral obligation whatsoever to allow anyone and everyone to try to undermine our editorial policy and create a general nuisance on our website.  Therefore, Remnant moderators reserve the right to edit or remove comments, and comments do not necessarily represent the views of The Remnant.
back to top
Last modified on Tuesday, September 8, 2015
Tweet

More in this category: « Protestant Jailed for Defending Catholic Doctrine: Welcome to the Brave New World Cardinals Against Cardinals - Our Lady of Akita and Francis the First »