The ‘mighty noise’, promulgated by Jeffrey Sachs, the Vatican’s favorite guru, resounds throughout his books, speeches, and lectures. The roar reverberates in the integral role that abortion and reproductive health services play throughout the UN Sustainable Development Goals (SDGs). Shockingly, every environmental (5 of them) conference at PASS in the last 2 years highlighted the importance of the passage and implementation of the SDGs by featuring Jeffrey Sachs.

While Jeffrey Sachs coyly did not mention abortion in his many Vatican speeches, he routinely advocates for global legalization of abortion and reproductive health services as the benchmark for success of the SDGs. Sandwiched in between his talks at the Vatican, Sachs globe trots and promotes the importance of reducing the world’s population through legal abortion and family planning clinics. In February 2015, just two months before his fourth address to the Pontifical Academy, Jeffrey Sachs was the keynote speaker at the UK Overseas Development Institute (ODI) where he vociferously and strenuously decried the growing population in Africa and the need to reduce Africans for the sake of the upcoming Sustainable Development Goals:

“World population continues to grow too rapidly in the poor countries and especially in Africa and this is a threat on many fronts. First, to ending extreme poverty itself in these places with rapid population growth. They are under tremendous ecological stress, economic stress, financial stress, social stress. Africa’s population is on a path the UN estimates to quadruple this century.  No thank you.”

The world’s self appointed population sage, Jeffrey Sachs, demands that the success of the UN’s Sustainable Development Goals depend on the speedy reduction of Africa’s population growth:

Who is the royal “we” that Sachs speaks of? Is it the elites of the intellectual left and the global NGO movements? Is the “we” the nameless UN or US bureaucrats who dangle humanitarian aid and foreign aid at Africa, in exchange for legalizing abortion?

How does population czar Sachs plan on reducing that nasty African fertility rate? the Vatican’s closest collaborator spells out his fertility reduction plan:

“Fortunately, we (royal) know just how it comes about. Keep girls in school, enable them to finish secondary school, ensure access to family planning services to universal health coverage and you will have a demographic transition of a voluntary basis like we (royal) need.”

Al Gore and Jeffrey Sachs: A Match Made in Hell 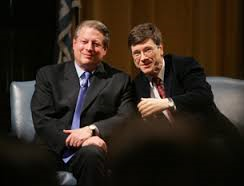 Less than two months after this OGI speech, Sachs returns yet, again, to the Vatican for his 4th Address to embed adoption of the United Nations’ Sustainable Development Goals with the Pope’s Laudato Si encyclical. Sure enough, the Encyclical calls on “countries to support the policies and programs of sustainable development.” (LS#52). Mission Accomplished.

As always, the UN diplomat never utters the “A” word into the Leonine Walls of the Vatican. Sachs cleverly doesn’t mention the need to push family planning services on African girls. How shrewd of him to maintain much silence.

Make no mistake. The UN and its Sustainable Development Czar have Africa in its sights. This is nothing new. In 2007, Jeffrey Sachs addressed the people of Nigeria with astonishing, yet typical hubris, instructing them to limit their family size to three children.

“I am really scared about population explosion in Nigeria. It is not healthy. Nigeria should work towards attaining a maximum of three children per family.”

Bishops of Nigeria, are you listening? Sachs, along with other UN experts, seek to limit Nigerian families to only 3 children. As the Director of the UN Sustainable Development Goal Network, Sachs wields enormous power to implement his handpicked family size goals, which are predicated on reducing the world’s population, most especially, in Africa.

So, the white man from the elite Eastern corridor of power doesn’t want Africans to populate their continent! Sach’s elitist attitude in the words of the Nigerian pro life leader, Obianuju “Uju” Ekeocha smacks of “cultural imperialism.” Read Uju’s Open Letter to Melinda Gates, who with her husband’s billions, propagates the anti life agenda of the UN SDGs. Uju’s letter can be viewed www.cultureoflifeafrica.com.

Pope John Paul II understood the danger of UN demographic population politics and he fought heroically to defeat the UN at every turn. In his Evangelium Vitae, St. John Paul the Great astutely cautioned against the language and tactics of the critics of demographic growth.

“Today not a few of the powerful of the earth act in the same way. They too are haunted by the current demographic growth, and fear that the most prolific and poorest peoples represent a threat for the well-being and peace of their own countries. Consequently, rather than wishing to face and solve these serious problems with respect for the dignity of individuals and families and for every person's inviolable right to life, they prefer to promote and impose by whatever means a massive programme of birth control. Even the economic help which they would be ready to give is unjustly made conditional on the acceptance of an anti-birth policy.” (EV #16)

The prescient sainted Pope anticipated that a massive UN program of birth control is in the works for Africa, masquerading as the lofty UN’s Sustainable Development Goals. Throughout his pontificate, he resisted and battled the UN. After years of opposition from the Vatican, the UN finally has a papacy who will support their SDGs.

Here is Jeffrey Sachs’ UN plan to reduce the population of Africa, spelled out in his 2015 book (which was distributed at the Vatican), entitled The Age of Sustainable Development:

“One of the keys to a quick voluntary reduction of fertility therefore is to lower the mortality rate of children, thereby giving confidence to parents to have fewer children as well. The legality of abortion also plays an evident role as well. Different societies have widely divergent views about abortion, but the data suggest that those countries with legalized abortion tend to have lower observed fertility rates than countries where abortion is illegal.” p. 213

These words penned by the Vatican’s expert should be fighting words for the African Episcopacy. The success of the UN’s Sustainable Development initiative depends on reducing the number of Africans, plain and simple. It is nothing short of an imperial takedown by the leftists in UN global government.

“Population dynamics are very important for Sustainable Development. The chances for sustainable development will be very different if the world population reaches 10.8 billion at the end of the century or instead peaks by 2050 and declines to 6.8 billion by 2100.” p. 214

The continent of Africa is in the cross-hairs of the elites at the United Nations. With the huge increase and imposition of carbon taxes and fines generated from the implementation of the Paris Climate Treaty in December, the UN plan is to dispatch one million Community Health Workers (CHW) armed with contraceptives, and Plan B to wipe future African generations off the face of the continent.

Jeffrey Sachs and his UN bureaucrats want to contracept a continent.

Time is running out for Africa. The Catholic Bishops of this resourceful and plentiful continent must raise their voices in opposition to the UN’s anti life and anti-Africa agenda. Time to create a mighty noise.

[Comment Guidelines - Click to view]
The Remnant values the comments and input of our visitors. It’s no secret, however, that trolls exist, and trolls can do a lot of damage to a brand. Therefore, our comments are heavily monitored 24/7 by Remnant moderators around the country.  They have been instructed to remove demeaning, hostile, needlessly combative, racist, Christophobic comments, and streams not related to the storyline. Multiple comments from one person under a story are also discouraged. Capitalized sentences or comments will be removed (Internet shouting).
The Remnant comments sections are not designed for frequent personal blogging, on-going debates or theological or other disputes between commenters. Please understand that we pay our writers to defend The Remnant’s editorial positions. We thus acknowledge no moral obligation whatsoever to allow anyone and everyone to try to undermine our editorial policy and create a general nuisance on our website.  Therefore, Remnant moderators reserve the right to edit or remove comments, and comments do not necessarily represent the views of The Remnant.
back to top
Last modified on Monday, July 13, 2015
Tweet

More in this category: « The Lake Garda Statement: On the Ecclesial and Civilizational Crisis Revisiting the Desolate City: Some Thoughts on the Current State of the Revolution »