Vince Lombardi: How the Catholic Church Formed One of the Greatest Coaches of all Time

In the middle of winter, between Epiphany and Ash Wednesday, a secular ritual of nearly fifty years has become part of the American cultural scene. It is called the Super Bowl, the championship game of the interminably long National Football League season. Two weeks of incessant television extravaganza lead up to the game itself, which ends with the winner being awarded the Lombardi Trophy named for a man now 44 years dead but still considered by many to be the greatest football coach in the history of the game.

In nine years as head coach of the Green Bay Packers, Vince Lombardi transformed an inept team into the powerhouse NFL dynasty of the1960s, winning the NFL championship five times and winning the first two Super Bowls. Lombardi was also intensely Catholic, a man who went to daily Mass. The Catholic Church was instrumental in forming the football coaching great.

Born in 1913 in Sheepshead Bay, Brooklyn, Vince Lombardi was the oldest of five children. His parents were part of the great southern Italian diaspora, specifically Salerno in Campania. Enrico “Harry” Lombardi was a butcher and ran a shop in the Manhattan’s Meatpacking District with his brother, Eddie. He had three siblings. Matilda “Mattie” Lombardi, one of thirteen children born to Antonio and Laura Izzo, took care of the family home.

Sunday Mass was compulsory for all the Lombardis. Following Mass were long Sunday dinners shared with several of the Izzo family and other relatives, friends and, on occasion, local priests. These dinners were never shorter than two hours and could last deep into the night. The food came out of the kitchen in waves. Antipasto. Minestrone soup. Spaghetti and meatballs. Ravioli. And the Izzo family favorite, spinach pie. The wine was homemade from grapes grown in the backyard. The food was cooked my Mattie and her four sisters in a demonstration of culinary teamwork. This Italian-American Sunday routine, combining Mass with an extended family meal, was harmonious for all those who experienced it and was vital to the upbringing of Vince Lombardi. 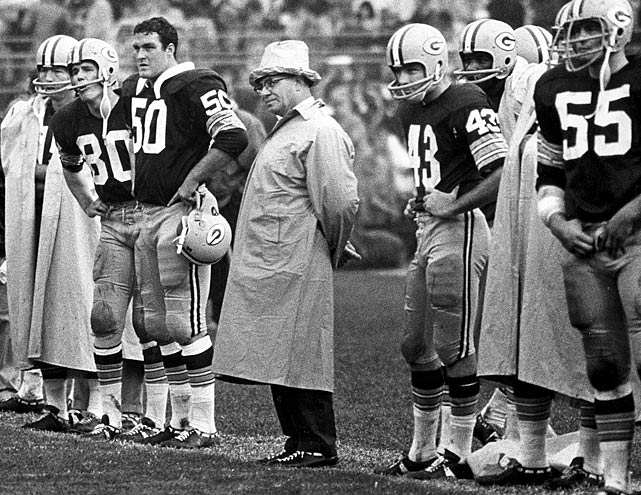 Lombardi’s definitive biographer, David Maraniss, wrote that the “trinity of Vince Lombardi’s early years was religion, family and sports.” He, his mother, and siblings attended Mass daily. Mattie baked bread for the priests almost every day with young Vince walking it over to the rectory.

By the age of twelve, Lombardi was an altar boy. Priests often took Vince and other neighborhoods boys to Ebbets Field in Flatbush to watch the beloved Brooklyn Dodgers play ball. Lombardi played all the major sports but excelled in football. He enjoyed the ordered violence of the game. The Catholic Church wanted its boys to be vigorous when Lombardi was growing up and Lombardi did not let the Church down.

After graduating the eighth grade in 1928, young Vincent enrolled at Cathedral Collage of the Immaculate Conception in Queens, a high school seminary, in hopes of becoming a priest. After four years, Lombardi decided the priesthood was not his vocation.

He next enrolled at St. Francis Prep in 1932 and the stocky but short Lombardi became a star fullback on the team, earning All-city honors. Fordham University in the Bronx offered Lombardi a football scholarship in 1933 and he accepted. Moved to the offensive line at Fordham by Coach Jim Crowley, one of Notre Dame’s fabled Four Horsemen of the 1929s, the undersized Lombardi would become one of Fordham’s legendary Seven Blocks of Granite.

The Fordham Rams were a mighty team throughout the 1930s and would end the 1937 season, Lombardi’s senior year, undefeated and named number three in the nation.

Upon graduation, Lombardi struggled to find his way, as young college graduates often do. The brief, weak economic bounce created by the New Deal had floundered by 1938 and unemployment shot back up over 15 percent. He failed as a debt-collector and in semi-professional football. Encouraged by his father to go to law school, Lombardi left Fordham Law School after one discouraging semester. But Vince Lombardi persevered.

This is one of the many articles you missed if you're not a subscriber to The Remnant.  Please help us keep this website free of charge by subscribing today! (This article first appeared in the Sept 30, 2014 issue of The Remnant)

By 1929, Lombardi wanted to marry his girlfriend, Marie Planitz, but Harry Lombardi wisely insisted that his son have a steady job that could support a wife and children. Vince listened to his father. Good fortune would come Lombardi’s way by the summer of 1939.

Andy Palau, quarterback of three of the Fordham teams of the 1930s, offered Lombardi a job as assistant football coach and teacher at St. Cecilia High School across the Hudson River n Englewood, New Jersey at a salary of $1,700 a year for the two jobs. Lombardi accepted. Steadily employed, Lombardi was able to marry Marie in 1940. Vince and Marie would become parents of two children.

Vince Lombardi would spend eight years at St. Cecilia, an apprenticeship that united the disciplines of academics, football and Catholicism. He taught physics, chemistry and Latin and perhaps it was the need for precision in each that formed Lombardi the football coach. He also fused his teaching pedagogics with an ability to inspire when coaching his players.

In 1942, Lombardi became head football coach and St. Cecilia lost only the first game of the season. The next year, the St. Cecilia Saints were undefeated, having outscored their opponents 267-16, and were considered by many as the best high school team in the country. They would not lose a game until the finale of 1945.

In 1947, Fordham would hire their former Block of Granite as an assistant coach. At the end of 1948, the US Military Academy at West Pont hired Lombardi to become the offensive line coach for the 1949 season. Army at this time was not the struggling program that it is now but a national college football juggernaut. It went undefeated from November 27, 1943 until an October 25, 1947 loss to Columbia and won national championships in 1944 and 1945.

Earl “Red” Blaik was Army’s highly regimented and highly analytical head coach, the first to make extensive use of film of opposing teams. Blaik, a Presbyterian of Scottish descent who was a graduate of West Point, and Lombardi, an Italian-American Catholic, would hit it off right away due to each man’s disciplinary thoughtful yet simple approach to football centered on execution. Army would go 9-0 in 1949. 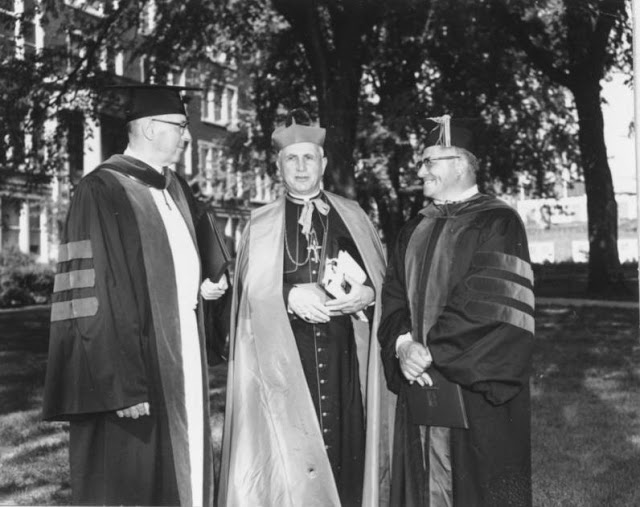 Lombardi was a great fit for West Point as the Military had many similarities to Catholicism. A Maraniss notes, “both emphasized discipline, order, organization, planning, attention to detail, repetition, the ability to adjust to different situations and remain flexible in pursuit of a goal while sustaining an obsession with one big idea.” Much of what the Catechism asks of Catholics is almost indistinguishable from what the military asks of a soldier or, in the case of West Point, what the U.S. Military Academy requires of its cadets.

In 1954, Lombardi was hired as offensive coordinator of his hometown New York Giants who had won only three games the year before. Jim Lee Howell was named head coach and Tom Landry, who would become a legendary head coach himself with the Dallas Cowboys, was named defensive coordinator. The improvement of the Giants was immediate. Under this trio, the Giants would win the 1956 NFL championship and lose the championship game of 1958 to the Baltimore Colts.

The crossroads of Lombardi’s coaching career came in 1959. His mentor, Red Blaik, retired as head coach of West Point in January. Hoping to be named as Blaik’s replacement, Lombardi was passed over. Although Lombardi thought his Italian heritage was held against him by the army brass, more problematical was that Lombardi had never served in the military (he was classified 4-H in World War II due to his being a husband, father and teacher) and he was never a cadet. Lombardi’s destiny would not be to coach at West Point but instead in Green Bay, Wisconsin. The Lowly Packers, who had won one game in 1958, hired Lombardi as head coach for the 1959 season.

This is not the place for a long review of Lombardi’s spectacular success as head coach of the Green Bay Packers. Let it be said that the Packers became a winning team in Lombardi first season and lost the 1960 NFL Championship in his second season to the Philadelphia Eagles in a nail-biter.

NFL championships were won in 1961, 1962, 1965, 1966 and 1967. Green Bay won the first two Super Bowls after the 1966 and 1967 seasons. Lombardi’s Packers were victorious because their head coach instilled in his players a disciplined, meticulous manner of playing football. It was a simple method of football that did not rely on fancy or elaborate plays but on precise execution of a small number of plays. The Packers’ repertoire of offensive plays was rather small, rarely more than thirty plays with variations, but were very effective in winning football games. In addition, few coaches, if any, got as much dedication from his players as did Lombardi.

After retiring from the Packers after Super Bowl Two, Lombardi returned to the sidelines to coach the Washington Redskins in 1969. The Reskins had been losers since 1955. In 1969, the Redskins became winners under Lombardi’s leadership. But a second Lombardi NFL powerhouse was not meant to be. Lombardi was diagnosed with colon cancer in June, 1969 and he died September 3, 1970 at Georgetown University Hospital.

Perhaps Lombardi’s Grandson, Joseph, explains best why Lombardi’s excellence as a coach was strongly linked to Lombardi’s Catholic faith. Joe Lombardi, born nine months after his grandfather’s death, is a NFL coach himself and was quarterbacks coach for the 2009 New Orleans Saints that won the Lombardi Trophy for winning that season’s Super Bowl. Joe Lombardi, a devout Catholic father of six children, points out “in football, you deal with Xs and Os and the game is about fundamentals such as blocking, tackling, throwing, and catching the ball. You look at the fundamentals of our Catholic faith and they are built on our sacraments, confession, the Rosary and attending Mass.”

Football pales in importance compared to the Catholic Faith, which is the truth of Our Blessed Lord. Yet games like football are part of the human experience. They can tell us about ourselves. They can help explain who we are.