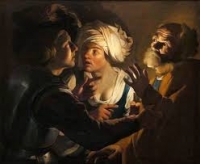 Do you think that it is possible that the last conclave was rigged, making Francis' election illegitimate?

The truth is that I have no idea. I am not a canonist; I have no training in theology or Church history and have no special ability to discern between the various arguments now being commonly bruited about the internet. I can see that we have a very large problem, one in the person of Francis that seems to equal the horrifying problems in the world. He seems to me to be, indeed, an intrinsic part of those external problems, a product of them, one might even say.

Unfortunately, I also have no special knowledge, other than what can be found out on the internet, about what happened in the Vatican in the last 2 years. I know what I have seen, and what I have heard, and it is obviously going to go down in Church history (if there is going to be anyone to write such things down in what is left of our future) as one of our most dangerous and inexplicable periods. Other than that, I know what anyone knows; rumours and counter rumours.

What I can see as a simple observer is that we are in a situation, with the Church and the world as a whole, that is apparently totally unprecedented in our long history. I hope you will forgive a long answer, since your question, as simple as it seems, encompasses quite a lot.

I suppose it is possible, and has probably happened in the past, that a pope has been brought out of illicit elections who really is pope, and has gone on to do his duty as perfectly as any pope. I don't think that the nature of the election process is so crucial, though given our situation I can see why it is an attractive answer. We have a serious problem with Bergoglio, and it is one that an irregular election would solve, if it could be proved. What a relief it would be to simply shrug off his strange speeches by saying, “Oh, just more anti-pope talk.”  Tempting indeed.

But I think there is a more generally useful answer that can be taken on board by any Catholic who still believes: If the pope is not a Catholic, and is pursuing goals contrary to those of Christ, does it matter if he is canonically an anti-pope? Does it matter if the election process was violated in this or that way?

Since the Ascension of Our Lord, we Christians have been charged with the conversion of the whole world. I do not find it surprising that it has taken us 2000 years to accomplish this, particularly since at the time the charge was given we still had much of the world left to discover and were dependent upon others to invent things like sailing ships and oceanic navigational tools. Given distractions like the human love of making war and the Black Death, I find a time frame of two millennia to be fairly reasonable. But in the end, by the end of the 19th century or thereabouts, I think we have done as well as we could be expected to do.

Christ is known throughout the world, even to people who, in the age of iPhones still live in round tents made of reindeer skins. There are Christians in every jungle, in every city, in every university, in every prison, every mine, every desert, and the blood of the martyrs has soaked with equal ubiquity into every soil and sand on earth. I think, though of course there are still millions unconverted, in general terms we have done what we were told to do. That He has also been rejected, again, by the majority of those who have heard Him, is not something we can control today any more than His friends could control it then.

My own ancestors were brought into the Faith a long time ago, while there was still an Emperor in Rome. But I have a good friend whose country did not see a Christian missionary until the 15th century. I met a bishop some time ago who said the first Catholic missionary didn't arrive in his country until the 1950s. But now, in the age of the internet, moreover, there can only be a handful of people left on earth (North Korea?) who have had no exposure at all to Christ and His truth.

So the Big Job we were given by the Second Person of the Holy Trinity, for Whom and through Whom all things were made, appears to be mainly done. Everyone has heard it, and those who are going to respond have done so. Which realisation came home to me shortly after that distressing night last March: the one communal task we have as human beings and as Catholics, is complete, so what comes next?

And now looking at the precedent, which is something quite natural to Catholics, I find that I cannot discover any precise parallel. We have a pope... a pope! who is capable of uttering complete nonsense, like "Corruption is a worse evil than sin," who not only appears to believe that it makes some kind of sense but who is instantly lauded and praised by millions of people, Catholics included, for having said it.

Have we ever in all our long history had the great mass of the Catholic faithful know so little of the doctrine of the Faith while at the same time positively believing so much that is directly opposed to it? We have converted the world to the Faith, indeed, but it seems that immediately after the completion of this great task, through a strange and inexplicable confluence of social and historical factors, the world has instantly lost it again.

Could we ever imagine another time in which millions of Catholics believe it is possible to be a "pro-choice Catholic"? Or who could possibly believe themselves to be good Catholics who accept concubinage as a moral good? Or even worse, unnatural perversions? And these, perhaps even more importantly, never definitively corrected by either bishop or pope?

But apparently we look to Rome in vain, for we have now seen, before all the eyes of the world in the first two weeks of this month, that these beliefs are not held only by the vast masses of Catholic laity, but are equally the belief of a plain majority of the men who attended the Synod as successors of the Apostles! What kind of precedent do we have for a Church, in the person of its most senior ministers, which has lost its own reason for existence, its own Faith? What does God say is to be done with salt that is no longer salty?

The approved prophets of the Catholic Church, all those visionaries who had visits in their little stone huts from the glorious Queen of Heaven, have all conveyed more or less the same message: that a time will come, soon, indeed is even upon us, of a "great apostasy," when there will be a vast loss of the hard-won Faith, and a terrible darkness will descend upon the world as a result. And the one historical reality that I cannot help but think of is the indiscriminate slaughter of, by now, perhaps billions of human beings before birth, with barely more than silence as a response from those consecrated to the service of God. All those holy prophets have said that this time of apostasy, that I cannot help but believe is upon us now, will be followed, and ended, by the most terrifying supernatural chastisement the world has ever seen. And looking at the abortion statistics it seems just, since evil on such a scale cannot go unanswered forever.

So, returning to your question, my answer is that I believe it to be moot. We are looking to the past for precedent in the answer to the conundrum of this strange and obviously intellectually corrupted man, Bergoglio. But if precedent is not helping us with any of the other strangenesses of the modern Church why do we look to it for the answer to this pope? Have we ever had a situation in which, after doctrine has been settled for two millennia, the pope opens it to questioning and "debate" at a Synod of bishops? And that Synod of bishops did not instantly shout him down and denounce him as a heretic? Could we possibly imagine that such a body would close its session leaving such issues to remain unanswered, and that swiftly, as to whether we should condone public concubinage or even the bizarre legal fiction of "homosexual unions"?!

I ask you, if the pope is not a Catholic, does it matter if he is an anti-pope? Do such canonically defined categories, dependent upon longstanding precedent, apply to this? How can they?

I do not know what Bergoglio is. But I know that nothing he says makes any sense. I know that he cannot be followed or obeyed, not because of his heresies, which are growing more manifest by the hour, but because of the incomprehensibility, the sheer nonsense of his utterances. There are two kinds of orders a soldier cannot obey: those that contradict the law and those that cannot be understood.

In such a situation, the lower ranks of an army must look to more obviously lawful and mentally competent leadership. And if that fails, which it does in many cases throughout the Catholic world, he is left to follow the law and his duty as best he can with the last intelligible, coherent and explicit orders has been given. He knows in general what the goals of the war are and he knows he has a duty to continue fighting that war until his last breath or until it is won.

If a pope is not a Catholic, does it really matter if he is an anti-pope? I don't pretend to know what really goes on inside the obviously confused and contradictory mind of Jorge Bergoglio, whether his oddness and confusion is a deliberate ruse or if it is simply a sign of dementia or if it is merely illustrative of what happens to a mind formed by Jesuits in the 1960s, but judging strictly from what he says and does, I know that he cannot be prosecuting the same goals in this war that we have been charged with. Two and two do not equal five, even if it is a pope who asserts it. And no solider is bound to follow orders that are contrary to the goals of the war he is in.

It is a grave error to imagine that the highest authority is the pope. He receives his authority from the Head of the Church, and if he begins to stray from his orders, he cannot be obeyed. I cannot determine what he believes, certainly not from what he says, but if he cannot be understood, believed or obeyed within the confines of the Faith we have received, I think I don't care very much whether Francis was elected illicitly or not.