Cooking With Raymond: The Leaked Screenplay

Written by  The Remnant Newspaper
Rate this item
(2 votes) 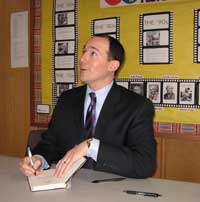 (A-CNN) A-CCN has acquired a leaked screenplay of the upcoming made-for-TV movie about EWTN’s latest prime time show. The movie is to be called, “Cooking with Raymond: the Untold Story.” It is based on the book by the show’s former director, Joe Smith. Here is a sneak peek!

Doug: Ok, folks, you know why I called this meeting. I’ll be frank with you. Our ratings are in the tank. Cardinal Dolan’s Comedy Hour started strong, but as soon as he had to resort back to the foam cheese head for laughs, I knew we jumped the shark.  Joe, what are our best-rated shows?

Joe: Well, the top rated show is The World Over with Raymond Arroyo.  The next is Savoring Our Faith, a cooking show with Fr. Leo.

Doug: Hmmm…interesting… I have an idea. Get this. What if we combined the premise of a cooking show with… Raymond Arroyo! Genius! The best of both worlds for ratings. We’ll put it in one of our prime time slots. Who do we have at 8pm on Wednesdays?

Doug: Sub it in for his Wednesday show. Tell him he’s cancelled.

Colin, are there any moral or theological problems with a cooking show?

Colin: Uhhh, not that I see off hand. Cooking is a morally neutral act that…

(Just then Fr. Joseph opens the door and walks in with a big plastic garbage can on wheels.)

Doug:  Fr. Joseph? I thought I told you we’re having a board meeting! Only laypersons are allowed in here.

Fr. Joseph: Oh, I’m sorry. I was just helping empty trashcans. Remember, I asked you how the brothers could help the network? You said by taking over the janitorial duties.

Doug: Ahh, yes, Father! How could I forget? Please by all means come in.

(Fr. Joseph slowly wheels his container over to the trashcan. Doug Keck impatiently looks at his watch and taps his foot. Fr. empties trashcan in his container and starts to wheel out the door.)

Doug:  I just finished my coke. Here’s the can.

(Fr. Joseph wheels out the door)

Doug: Ok, Joe. Get Raymond on the phone!

Female voice: Raymond Arroyo’s office. How can I help you?

Doug: Yes, this is Doug Keck. I’m calling for Raymond. Who’s this?

Female voice: I’m Raymond’s personal assistant. I screen all of his calls.

Doug: What!? (leans over to Joe) When did Arroyo get a personal assistant? We’re hurting for money here. Who authorized this?

Joe: I believe you did, sir.

Doug: Mary Ann, you tell Raymond he’s going to star in a cooking show next Wednesday night at 8pm. Oh, and tell him to book one of those celebrities he knows to cook with him! Tell him to be ready.

[On set, right before live Wednesday night show. Raymond Arroyo is on a kitchen set with an apron behind a counter with a stove and pots and pans.

Doug: This is excellent! Catholic TV history in the making! I’m so excited. Can’t wait to see this.

Raymond: Hi! And welcome to our first episode of Cooking with Raymond: Holiday Edition!

Yes, that’s right! A show that combines theology with delicious and delectable dishes from my own personal cookbook!

Doug:  Theology!? Who the heck said anything about theology?

Raymond:  With me this evening is a very special guest. You may have seen her in such shows as “Dancing with the Stars” and in her recent Nutri-System commercials. Yes, I’m talking about Marie Osmond! Give it up for Marie, Ladies and Gentlemen!

Doug: Marie Osmond!? Of all the celebrities he knows, he invites a Mormon on a Catholic cooking show?

Marie: Hi Raymond! I’m so excited to be here. Not only to cook some great dishes, but to talk about theology!

Doug: Nooo!!! This is crazy! I’m going to kill Arroyo! Stop the show! Fade to Black! Put on a rerun!

Director: I don’t have any ready!

Doug: (spots a stack of DVD’s on the table) Here! Here’s an old show. Put it on the air, quick!

[Broadcast of Cooking with Raymond cuts out, broadcast of an old “Life on the Rock” begins]

(cut to Life on the Rock)

Director: I have nothing to cut to!

(Cut back to Cooking with Raymond)

Raymond: (stirring spaghetti) So…Marie, please keep telling us about the angel Maroni. Most Catholics are not familiar with this particular angel.

Marie: Well, Raymond, the angel Maroni visited Joseph Smith and was the guardian of the golden plates.

Marie: But even more exciting than that is the planet Kolob! It is the closest planet to the throne of God and also the inspiration for the planet Kobol in Battlestar Galactica.

Doug: What the!??? What is Arroyo doing!!? Colin, is that theologically accurate?

Colin: The first part, no.  However, the Battlestar Galactica reference is factually accurate and indeed fascinating.

Doug: Joe, quick, take a phone call!! Tell Raymond he has a call!!

Raymond: (listening to ear piece) I’m sorry Marie, I’ve just been told we have a phone call! Oh, and guess what, folks? It’s from my mom! (Applause) Hi, mom and happy holidays to you. Are you enjoying the show?

Mother: Raymond! What the heck are you doing!? I leave my network in the hands of a lay board to save it and years later tune in. Instead of Fr. Mitch, I see you stirring spaghetti and interviewing a Mormon! If I had known this, I would have just entrusted my network to the USCCB!

Mother: You should be up there taking Cardinal Mueller to task. Instead you’re making meatballs with Marie Osmond! Do you know what the Cardinal said about Our Lady?

Raymond: Yes, well, umm. Mother! You’re Italian. What do you think of the spaghetti and meatballs Marie and I have been making?

Mother: Meatballs? That’s another thing! If you’re gonna do a cooking show, at least know how to cook! Those meatballs are a disgrace! I wouldn’t serve them to my dog. To make a good meatball, you need to….(dial tone)

Raymond: Mother? Mother? Oh dear, it looks like we got disconnected. Mother, I just want to say that you are an inspiration to us all and keep hanging in there! (applause)

Raymond:  Well Marie, we’re almost out of time, but before we go I was wondering if you would indulge me in a holiday duet?

Marie: Why of course, Raymond!

(Cut to the board room the next day)

Doug: Well, the show last night was an unmitigated disaster of epic proportions! Whose idea was this?

Joe: We just got the ratings in from last night. “Cooking With Raymond” was the most watched show in EWTN history! We have a slew of advertisers who want to buy time on it!

Doug: (face lights up) Magnificent! It’s a sign! As I was saying, “Cooking With Raymond” has UNLIMITED potential! Joe, call Arroyo and tell him to slot more guests. This is going to be HUGE!